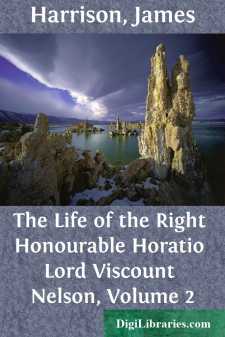 In tracing the history of a hero so active as Lord Nelson, the mind can scarcely be allowed a moment's pause. His multifarious transactions, indeed, frequently arise in such rapid successions, that they become far too much involved with each other to admit of any precise chronological arrangement. Operations are commenced, which cannot always be soon brought to a conclusion: and, while these are transacting, an attention to other occurrences, of more or less magnitude, becomes perpetually requisite; which are, in their turn, subjected to similar procrastinating delays and necessarily diverted attentions.

The cares of Lord Nelson can hardly be said to have one minute ceased, even when he landed, in safety, at Palermo, the royal and illustrious characters, and their immense treasure, which he had successfully conveyed thither, amidst such alarming difficulties and dangers. His anxious bosom, it is true, was now relieved from the apprehensions which it had suffered during the storm; and felt, no doubt, as it ought, a sympathetic sense of the grateful felicitations of beloved friends, on the event of their happy arrival at a place of secure refuge. He could not, indeed, fail to rejoice in their joy: but it was, with all of them, a joy mingled with melancholy; and, with him, it was particularly so.

An intellectual tempest, at this apparently enviable period of our hero's glory, was violently agitating the secret recesses of his too susceptible heart. Justly jealous of honour, his soul ever kindled with alarm at the most remote idea of aught that could, by any possibility of implication, be considered as having the smallest tendency to sully or impair a single particle of that celestial inheritance which he felt conscious of having a legitimate right to possess in undiminished lustre, If it should be thought, by the more calmly philosophical mind, that he might sometimes too soon take the alarm; let it, at least, not fail to be remembered, that the true votary of honour must never be, even once, a single moment too late.

The reader who has attentively perused the preceding part of Lord Nelson's history, will long since have discovered, that one grand trait of character, in this exalted man, was a determined resolution of accomplishing, to it's fullest possible extent, the business, whatever it might be, which was once committed to his charge; and that, in every expedition, it formed his chief pride, to effect even more than could have been expected, by those who had, from the greatest possible confidence in his skill and ability, selected him for the enterprise. It was this invariable principle that, by prompting him to serve on shore, at the batteries before Calvi, cost him the vision of an eye; and it was to this same cause, that he owed the loss of his arm at Teneriffe. Conformably to this grand characteristic, having so honourably received the Earl of St. Vincent's orders to seek and to destroy the French armament, which he had at length gloriously encountered at the mouth of the Nile; he still internally regretted, that the wound on that occasion received in his forehead, by rendering him almost wholly blind, had proved the sole cause of a single French ship's escape....