The Life of the Party 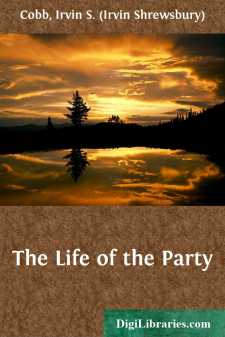 The Life of the Party I

It had been a successful party, most successful. Mrs. Carroway's parties always were successes, but this one nearing its conclusion stood out notably from a long and unbroken Carrowayian record. It had been a children's party; that is to say, everybody came in costume with intent to represent children of any age between one year and a dozen years. But twelve years was the limit; positively nobody, either in dress or deportment, could be more than twelve years old. Mrs. Carroway had made this point explicit in sending out the invitations, and so it had been, down to the last hair ribbon and the last shoe buckle. And between dances they had played at the games of childhood, such as drop the handkerchief, and King William was King James' son and prisoner's base and the rest of them.

The novelty of the notion had been a main contributory factor to its success; that, plus the fact that nine healthy adults out of ten dearly love to put on freakish garbings and go somewhere. To be exactly truthful, the basic idea itself could hardly be called new, since long before some gifted mind thought out the scheme of giving children's parties for grown-ups, but with her customary brilliancy Mrs. Carroway had seized upon the issues of the day to serve her social purposes, weaving timeliness and patriotism into the fabric of her plan by making it a war party as well. Each individual attending was under pledge to keep a full and accurate tally of the moneys expended upon his or her costume and upon arrival at the place of festivities to deposit a like amount in a repository put in a conspicuous spot to receive these contributions, the entire sum to be handed over later to the guardians of a military charity in which Mrs. Carroway was active.

It was somehow felt that this fostered a worthy spirit of wartime economy, since the donation of a person who wore an expensive costume would be relatively so much larger than the donation of one who went in for the simpler things. Moreover, books of thrift stamps were attached to the favours, the same being children's toys of guaranteed American manufacture.

In the matter of refreshments Mrs. Carroway had been at pains to comply most scrupulously with the existing rationing regulations. As the hostess herself said more than once as she moved to and fro in a flounced white frock having the exaggeratedly low waistline of the sort of frock which frequently is worn by a tot of tender age, with a wide blue sash draped about her almost down at her knees, and with fluffy skirts quite up to her knees, with her hair caught up in a coquettish blue bow on the side of her head and a diminutive fan tied fast to one of her wrists with a blue ribbon—so many of the ladies who had attained to Mrs. Carroway's fairly well-ripened years did go in for these extremely girlishly little-girly effects—as the hostess thus attired and moving hither and yon remark, "If Mr. Herbert Hoover himself were here as one of my guests to-night I am just too perfectly sure he could find absolutely nothing whatsoever to object to!"

It would have required much stretching of that elastic property, the human imagination, to conceive of Mr....