The Life of St. Declan of Ardmore 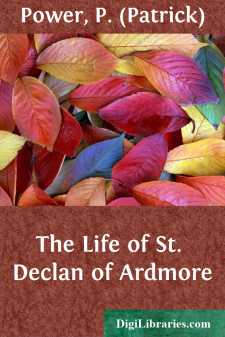 INTRODUCTION "If thou hast the right, O Erin,to a champion of battle to aid theethou hast the head of a hundredthousand, Declan of Ardmore"(Martyrology of Oengus).

Five miles or less to the east of Youghal Harbour, on the southern Irish coast, a short, rocky and rather elevated promontory juts, with a south-easterly trend, into the ocean [about 51 deg. 57 min. N / 7 deg. 43 min. W]. Maps and admiralty charts call it Ram Head, but the real name is Ceann-a-Rama and popularly it is often styled Ardmore Head. The material of this inhospitable coast is a hard metamorphic schist which bids defiance to time and weather. Landwards the shore curves in clay cliffs to the north-east, leaving, between it and the iron headland beyond, a shallow exposed bay wherein many a proud ship has met her doom. Nestling at the north side of the headland and sheltered by the latter from Atlantic storms stands one of the most remarkable groups of ancient ecclesiastical remains in Ireland—all that has survived of St. Declan's holy city of Ardmore. This embraces a beautiful and perfect round tower, a singularly interesting ruined church commonly called the cathedral, the ruins of a second church beside a holy well, a primitive oratory, a couple of ogham inscribed pillar stones, &c., &c.

No Irish saint perhaps has so strong a local hold as Declan or has left so abiding a popular memory. Nevertheless his period is one of the great disputed questions of early Irish history. According to the express testimony of his Life, corroborated by testimony of the Lives of SS. Ailbhe and Ciaran, he preceded St. Patrick in the Irish mission and was a co-temporary of the national apostle. Objection, exception or opposition to the theory of Declan's early period is based less on any inherent improbability in the theory itself than on contradictions and inconsistencies in the Life. Beyond any doubt the Life does actually contradict itself; it makes Declan a cotemporary of Patrick in the fifth century and a cotemporary likewise of St. David a century later. In any attempted solution of the difficulty involved it may be helpful to remember a special motive likely to animate a tribal histrographer, scil.:—the family relationship, if we may so call it, of the two saints; David was bishop of the Deisi colony in Wales as Declan was bishop of their kinsmen of southern Ireland. It was very probably part of the writer's purpose to call attention to the links of kindred which bound the separated Deisi; witness his allusion later to the alleged visit of Declan to his kinsmen of Bregia. Possibly there were several Declans, as there were scores of Colmans, Finians, &c., and hence perhaps the confusion and some of the apparent inconsistencies. There was certainly a second Declan, a disciple of St. Virgilius, to whom the latter committed care of a church in Austria where he died towards close of eighth century. Again we find mention of a St. Declan who was a foster son of Mogue of Ferns, and so on. It is too much, as Delehaye ("Legendes Hagiographiques") remarks, to expect the populace to distinguish between namesakes....