The Life of Nelson, Volume 1 The Embodiment of the Sea Power of Great Britain 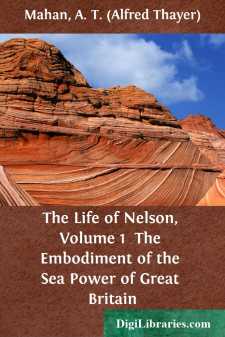 It is the appointed lot of some of History's chosen few to come upon the scene at the moment when a great tendency is nearing its crisis and culmination. Specially gifted with qualities needed to realize the fulness of its possibilities, they so identify themselves with it by their deeds that they thenceforth personify to the world the movement which brought them forth, and of which their own achievements are at once the climax and the most dazzling illustration. Fewer still, but happiest of all, viewed from the standpoint of fame, are those whose departure is as well timed as their appearance, who do not survive the instant of perfected success, to linger on subjected to the searching tests of common life, but pass from our ken in a blaze of glory which thenceforth forever encircles their names. In that evening light break away and vanish the ominous clouds wherewith human frailties or tyrant passions had threatened to darken their renown; and their sun goes down with a lustre which the lapse of time is powerless to dim. Such was the privilege of the stainless Wolfe; such, beyond all others, that of Nelson. Rarely has a man been more favored in the hour of his appearing; never one so fortunate in the moment of his death.

Yet, however accidental, or providential, this rarely allotted portion, this crowning incident of an heroic career, it is after all but an incident. It the man has not contrived; but to it he has contributed much, without which his passing hour would have faded to memory, undistinguished among those of the myriads, great and small, who have died as nobly and are forever forgotten. A sun has set; but before its setting it has run a course, be it long or short, and has gathered a radiance which fixes upon its parting beams the rapt attention of beholders. The man's self and the man's works, what he was and what he did, the nature which brought forth such fruits, the thoughts which issued in such acts, hopes, fears, desires, quick intuitions, painful struggles, lofty ambitions, happy opportunities, have blended to form that luminous whole, known and seen of all, but not to be understood except by a patient effort to resolve the great result into its several rays, to separate the strands whose twisting has made so strong a cord.

Concerning the man's external acts, it will often happen that their true value and significance can best be learned, not from his own personal recital, but from an analytic study of the deeds themselves. Yet into them, too, often enters, not only the subtile working of their author's natural qualities, but also a certain previous history of well-defined opinions, of settled principles firmly held, of trains of thought and reasoning, of intuitions wrought into rational convictions, all of which betray both temperament and character. Of these intellectual antecedents, the existence and development may be gleaned from his writings, confirming the inference reached somewhat mechanically by the scrutiny of his actions. They play to the latter the part of the soul to the body, and thus contribute to the rather anatomical result of the dissecting process a spiritual element it would otherwise lack. But if this is so even of the outward career, it is far more deeply true of the inner history, of that underlying native character, which masterfully moulds and colors every life, yet evades the last analysis except when the obscure workings of heart and mind have been laid bare by their owner's words, recording the feelings of the fleeting hour with no view to future inspection. In these revelations of self, made without thought of the world outside, is to be found, if anywhere, the clue to that complex and often contradictory mingling of qualities which go to form the oneness of the man's personality. This discordance between essential unity and superficial diversities must be harmonized, if a true conception of his being is to be formed. We know the faces of our friends, but we see each as one. The features can, if we will, be separately considered, catalogued, and valued; but who ever thus thinks habitually of one he knows well? Yet to know well must be the aim of biography,—so to present the traits in their totality, without suppression of any, and in their true relative proportions, as to produce, not the blurred or distorted outlines seen through an imperfect lens, but the vivid apprehension which follows long intimacy with its continual, though unconscious, process of correction....