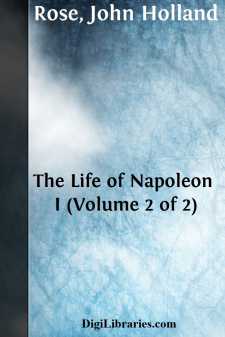 "Napoleon is the only man in Europe that knows the value of time."—Czartoryski.

Before describing the Continental campaign which shattered the old European system to its base, it will be well to take a brief glance at the events which precipitated the war of the Third Coalition. Even at the time of Napoleon's rupture with England, his highhanded conduct towards the Italian Republic, Holland, Switzerland, and in regard to the Secularizations in Germany, had exposed him to the hostility of Russia, Sweden, and Austria; but as yet it took the form of secret resentment. The last-named Power, under the Ministry of Count Cobenzl, had relapsed into a tame and undignified policy, which the Swedish Ambassador at Vienna described as "one of fear and hope—fear of the power of France, and hope to obtain favours from her."[1] At Berlin, Frederick William clung nervously to neutrality, even though the French occupation of Hanover was a threat to Prussia's influence in North Germany. The Czar Alexander was, at present, wrapt up in home affairs; and the only monarch who as yet ventured to show his dislike of the First Consul was the King of Sweden. In the autumn of 1803 Gustavus IV. defiantly refused Napoleon's proposals for a Franco-Swedish alliance, baited though they were with the offer of Norway as an eventual prize for Sweden, and a subsidy for every Swedish warship serving against England. And it was not the dislike of a proud nature to receive money which prompted his refusal; for Gustavus, while in Germany, hinted to Drake that he desired to have pecuniary help from England for the defence of his province of Pomerania.[2]

But a doughtier champion of European independence was soon to enter the field. The earlier feelings of respect and admiration which the young Czar had cherished towards Napoleon were already overclouded, when the news of the execution of the Duc d'Enghien at once roused a storm of passion in his breast. The chivalrous protection which he loved to extend to smaller States, the guarantee of the Germanic system which the Treaty of Teschen had vested in him, above all, his horror at the crime, led him to offer an emphatic protest. The Russian Court at once went into mourning, and Alexander expressed both to the German Diet and to the French Government his indignation at the outrage. It was ever Napoleon's habit to return blow with blow; and he now instructed Talleyrand to reply that in the D'Enghien affair he had acted solely on the defensive, and that Russia's complaint "led him to ask if, at the time when England was compassing the assassination of Paul I., the authors of the plot had been known to be one league beyond the [Russian] frontiers, every effort would not have been made to have them seized?" Never has a poisoned dart been more deftly sped at the weak spot of an enemy's armour. The Czar, ever haunted by the thought of his complicity in a parricidal plot, was deeply wounded by this malicious taunt, and all the more so because, as the death of Paul had been officially ascribed to a fit, the insult could not be flung back.[3] The only reply was to break off all diplomatic relations with Napoleon; and this took place in the summer of 1804.[4]

Yet war was not to break out for more than a year....