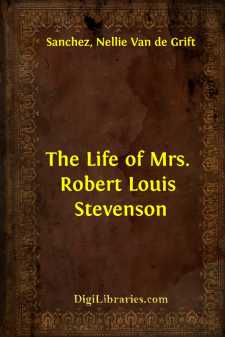 To arrive at a full understanding of the complex and unusual character of Fanny Van de Grift Stevenson, which perhaps played as large a part as her beauty and intellectual charm in drawing to her the affections of one of the greatest romance writers of our day, one must go back and seek out all the uncommon influences that combined to produce it—a long line of sturdy ancestors, running back to the first adventurers who left their sheltered European homes and sailed across the sea to try their fortunes in a wild, unknown land; her childhood days spent among the hardy surroundings of pioneer Indiana, with its hints of a past tropical age and its faint breath of Indian reminiscence; the early breaking of her own family ties and her fearless adventuring by way of the Isthmus of Panama to the distant land of gold, and her brave struggle against adverse circumstances in the mining camps of Nevada. All these prenatal influences and personal experiences, so foreign to the protected lives of the women of Stevenson's own race, threw about her an atmosphere of thrilling New World romance that appealed with irresistible force to the man who was himself Romance personified.

Fanny Stevenson was a lineal descendant of two of the oldest families in the United States, her first ancestors landing in this country in the early part of the seventeenth century. In 1642 Jöran Kyn, called "The Snow White," reached America in the ship Fama as a member of the life-guard of John Printz, governor of the Swedish colony established in the New World by King Gustavus Adolphus. He took up a large tract of land and was living in peace and comfort on the Delaware River when William Penn landed in America. He was the progenitor of eleven generations of descendants born on American soil. His memory is embalmed in an old document still extant as "a man who never irritated even a child."

In the list of his descendants one Matthias stands out as "a tall handsome man, with a very melodious voice which could be intelligibly heard at times across the Delaware."

A later descendant, John Keen, born in 1747, fought and shed his blood in the war of American Independence, having been wounded in the battle of Princeton while in the act of delivering a message to General Washington. It was he who married Mildred Cook, daughter of James Cook, an English sea-captain who commanded the London Packet, plying between London and New York. Family tradition has it that he was a near relative of Captain Cook of South Sea fame. When Fanny Stevenson went a-sailing in the South Seas, following in the track of the great explorer, she boldly claimed this kinship, and, much to her delight, was immediately christened Tappeni Too-too, which was as near as the natives could come to Captain Cook's name.

We have a charming old-fashioned silhouette portrait in our family of a lovely young creature with a dainty profile and curls gathered in a knot....