The Life of John Bunyan 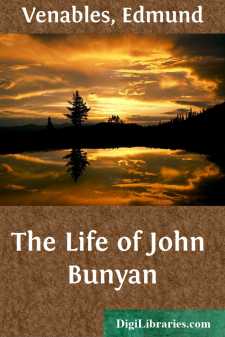 John Bunyan, the author of the book which has probably passed through more editions, had a greater number of readers, and been translated into more languages than any other book in the English tongue, was born in the parish of Elstow, in Bedfordshire, in the latter part of the year 1628, and was baptized in the parish church of the village on the last day of November of that year.

The year of John BunyanвЂ™s birth was a momentous one both for the nation and for the Church of England.  Charles I., by the extorted assent to the Petition of Right, had begun reluctantly to strip himself of the irresponsible authority he had claimed, and had taken the first step in the struggle between King and Parliament which ended in the House of Commons seating itself in the place of the Sovereign.  Wentworth (better known as Lord Strafford) had finally left the Commons, baffled in his nobly-conceived but vain hope of reconciling the monarch and his people, and having accepted a peerage and the promise of the Presidency of the Council of the North, was foreshadowing his policy of вЂњThorough,вЂќ which was destined to bring both his own head and that of his weak master to the block.  The Remonstrance of Parliament against the toleration of Roman Catholics and the growth of Arminianism, had been presented to the indignant king, who, wilfully blinded, had replied to it by the promotion to high and lucrative posts in the Church of the very men against whom it was chiefly directed.  The most outrageous upholders of the royal prerogative and the irresponsible power of the sovereign, Montagu and Mainwaring, had been presented, the one to the see of Chichester, the otherвЂ”the impeached and condemned of the CommonsвЂ”to the rich living MontaguвЂ™s consecration had vacated.  Montaigne, the licenser of MainwaringвЂ™s incriminated sermon, was raised to the Archbishopric of York, while Neile and Laud, who were openly named in the Remonstrance as the вЂњtroublers of the English Israel,вЂќ were rewarded respectively with the rich see of Durham and the important and deeply-dyed Puritan diocese of London.  Charles was steadily sowing the wind, and destined to reap the whirlwind which was to sweep him from his throne, and involve the monarchy and the Church in the same overthrow.  Three months before BunyanвЂ™s birth Buckingham, on the eve of his departure for the beleaguered and famine-stricken city of Rochelle, sanguinely hoping to conclude a peace with the French king beneath its walls, had been struck down by the knife of a fanatic, to the undisguised joy of the majority of the nation, bequeathing a legacy of failure and disgrace in the fall of the Protestant stronghold on which the eyes of Europe had been so long anxiously fixed.

The year was closing gloomily, with ominous forecasts of the coming hurricane, when the babe who was destined to leave so imperishable a name in English literature, first saw the light in an humble cottage in an obscure Bedfordshire village.  His father, Thomas Bunyan, though styling himself in his will by the more dignified title of вЂњbrazier,вЂќ was more properly what is known as a вЂњtinkerвЂќ; вЂњa mender of pots and kettles,вЂќ according to BunyanвЂ™s contemporary biographer, Charles Doe.  He was not, however, a mere tramp or vagrant, as travelling tinkers were and usually are still, much less a disreputable sot, a counterpart of ShakespeareвЂ™s Christopher Sly, but a man with a recognized calling, having a settled home and an acknowledged position in the village community of Elstow.  The family was of long standing there, but had for some generations been going down in the world.  BunyanвЂ™s grandfather, Thomas Bunyan, as we learn from his still extant will, carried on the occupation of a вЂњpetty chapman,вЂќ or small retail dealer, in his own freehold cottage, which he bequeathed, вЂњwith its appurtenances,вЂќ to his second wife, Ann, to descend, after her death, to her stepson, his namesake, Thomas, and her own son Edward, in equal shares.  This cottage, which was probably John BunyanвЂ™s birthplace, persistent tradition, confirmed by the testimony of local names, warrants us in placing near the hamlet of Harrowden, a mile to the east of the village of Elstow, at a place long called вЂњBunyanвЂ™s End,вЂќ where two fields are still called by the name of вЂњBunyansвЂќ and вЂњFurther Bunyans.вЂќ  This small freehold appears to have been all that remained, at the death of John BunyanвЂ™s grandfather, of a property once considerable enough to have given the name of its possessor to the whole locality....