The Life of Horatio Lord Nelson 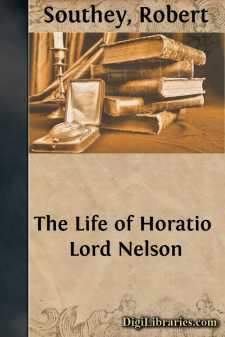 HORATIO, son of Edmund and Catherine Nelson, was born September 29, 1758, in the parsonage-house of Burnham Thorpe, a village in the county of Norfolk, of which his father was rector. His mother was a daughter of Dr. Suckling, prebendary of Westminster, whose grandmother was sister of Sir Robert Walpole, and this child was named after his godfather, the first Lord Walpole. Mrs. Nelson died in 1767, leaving eight out of eleven children. Her brother, Captain Maurice Suckling, of the navy visited the widower upon this event, and promised to take care of one of the boys. Three years afterwards, when HORATIO was only twelve years of age, being at home during the Christmas holidays, he read in the county newspaper that his uncle was appointed to the RAISONNABLE, of sixty-four guns. "Do, William," said he to a brother who was a year and a half older than himself, "write to my father, and tell him that I should like to go to sea with uncle Maurice." Mr. Nelson was then at Bath, whither he had gone for the recovery of his health: his circumstances were straitened, and he had no prospect of ever seeing them bettered: he knew that it was the wish of providing for himself by which Horatio was chiefly actuated, and did not oppose his resolution; he understood also the boy's character, and had always said, that in whatever station he might be placed, he would climb if possible to the very top of the tree. Captain Suckling was written to. "What," said he in his answer, "has poor Horatio done, who is so weak, that he, above all the rest, should be sent to rough it out at sea?—But let him come; and the first time we go into action, a cannon-ball may knock off his head, and provide for him at once."

It is manifest from these words that Horatio was not the boy whom his uncle would have chosen to bring up in his own profession. He was never of a strong body; and the ague, which at that time was one of the most common diseases in England, had greatly reduced his strength; yet he had already given proofs of that resolute heart and nobleness of mind which, during his whole career of labour and of glory, so eminently distinguished him. When a mere child, he strayed a-birds'-nesting from his grandmother's house in company with a cowboy: the dinner-hour elapsed; he was absent, and could not be found; and the alarm of the family became very great, for they apprehended that he might have been carried off by gipsies. At length, after search had been made for him in various directions, he was discovered alone, sitting composedly by the side of a brook which he could not get over. "I wonder, child," said the old lady when she saw him, "that hunger and fear did not drive you home." "Fear! grandmama:" replied the future hero, "I never saw fear:—What is it?" Once, after the winter holidays, when he and his brother William had set off on horseback to return to school, they came back, because there had been a fall of snow; and William, who did not much like the journey, said it was too deep for them to venture on. "If that be the case," said the father, "you certainly shall not go; but make another attempt, and I will leave it to your honour. If the road is dangerous you may return: but remember, boys, I leave it to your honour!" The snow was deep enough to have afforded them a reasonable excuse; but Horatio was not to be prevailed upon to turn back. "We must go on," said he: "remember, brother, it was left to our honour!"—There were some fine pears growing in the schoolmaster's garden, which the boys regarded as lawful booty, and in the highest degree tempting; but the boldest among them were afraid to venture for the prize. Horatio volunteered upon this service: he was lowered down at night from the bedroom window by some sheets, plundered the tree, was drawn up with the pears, and then distributed them among his school-fellows without reserving any for himself. "He only took them," he said, "because every other boy was afraid."

Early on a cold and dark spring morning Mr. Nelson's servant arrived at this school, at North Walsham, with the expected summons for Horatio to join his ship. The parting from his brother William, who had been for so many years his playmate and bed-fellow, was a painful effort, and was the beginning of those privations which are the sailor's lot through life. He accompanied his father to London. The RAISONNABLE was lying in the Medway. He was put into the Chatham stage, and on its arrival was set down with the rest of the passengers, and left to find his way on board as he could. After wandering about in the cold, without being able to reach the ship, an officer observed the forlorn appearance of the boy, questioned him; and happening to be acquainted with his uncle, took him home and gave him some refreshments....