The Life of Friedrich Schiller Comprehending an Examination of His Works 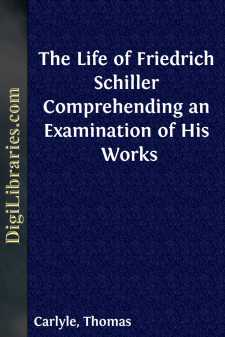 Among the writers of the concluding part of the last century there is none more deserving of our notice than Friedrich Schiller. Distinguished alike for the splendour of his intellectual faculties, and the elevation of his tastes and feelings, he has left behind him in his works a noble emblem of these great qualities: and the reputation which he thus enjoys, and has merited, excites our attention the more, on considering the circumstances under which it was acquired. Schiller had peculiar difficulties to strive with, and his success has likewise been peculiar. Much of his life was deformed by inquietude and disease, and it terminated at middle age; he composed in a language then scarcely settled into form, or admitted to a rank among the cultivated languages of Europe: yet his writings are remarkable for their extent and variety as well as their intrinsic excellence; and his own countrymen are not his only, or perhaps his principal admirers. It is difficult to collect or interpret the general voice; but the World, no less than Germany, seems already to have dignified him with the reputation of a classic; to have enrolled him among that select number whose works belong not wholly to any age or nation, but who, having instructed their own contemporaries, are claimed as instructors by the great family of mankind, and set apart for many centuries from the common oblivion which soon overtakes the mass of authors, as it does the mass of other men.

Such has been the high destiny of Schiller. His history and character deserve our study for more than one reason. A natural and harmless feeling attracts us towards such a subject; we are anxious to know how so great a man passed through the world, how he lived, and moved, and had his being; and the question, if properly investigated, might yield advantage as well as pleasure. It would be interesting to discover by what gifts and what employment of them he reached the eminence on which we now see him; to follow the steps of his intellectual and moral culture; to gather from his life and works some picture of himself. It is worth inquiring, whether he, who could represent noble actions so well, did himself act nobly; how those powers of intellect, which in philosophy and art achieved so much, applied themselves to the every-day emergencies of life; how the generous ardour, which delights us in his poetry, displayed itself in the common intercourse between man and man. It would at once instruct and gratify us if we could understand him thoroughly, could transport ourselves into his circumstances outward and inward, could see as he saw, and feel as he felt.

But if the various utility of such a task is palpable enough, its difficulties are not less so. We should not lightly think of comprehending the very simplest character, in all its bearings; and it might argue vanity to boast of even a common acquaintance with one like Schiller's. Such men as he are misunderstood by their daily companions, much more by the distant observer, who gleans his information from scanty records, and casual notices of characteristic events, which biographers are often too indolent or injudicious to collect, and which the peaceful life of a man of letters usually supplies in little abundance....