The Life of David As Reflected in His Psalms 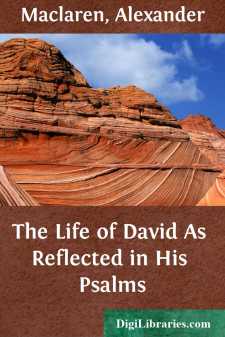 Perhaps the most striking characteristic of the life of David is its romantic variety of circumstances. What a many-coloured career that was which began amidst the pastoral solitudes of Bethlehem, and ended in the chamber where the dying ears heard the blare of the trumpets that announced the accession of Bathsheba's son! He passes through the most sharply contrasted conditions, and from each gathers some fresh fitness for his great work of giving voice and form to all the phases of devout feeling. The early shepherd life deeply influenced his character, and has left its traces on many a line of his psalms.

"Love had he found in huts where poor men lie;His daily teachers had been woods and rills;The silence that is in the starry sky,The sleep that is among the lonely hills."

And then, in strange contrast with the meditative quiet and lowly duties of these first years, came the crowded vicissitudes of the tempestuous course through which he reached his throne—court minstrel, companion and friend of a king, idol of the people, champion of the armies of God—and in his sudden elevation keeping the gracious sweetness of his lowlier, and perhaps happier days. The scene changes with startling suddenness to the desert. He is "hunted like a partridge upon the mountains," a fugitive and half a freebooter, taking service at foreign courts, and lurking on the frontiers with a band of outlaws recruited from the "dangerous classes" of Israel. Like Dante and many more, he has to learn the weariness of the exile's lot—how hard his fare, how homeless his heart, how cold the courtesies of aliens, how unslumbering the suspicions which watch the refugee who fights on the side of his "natural enemies." One more swift transition and he is on the throne, for long years victorious, prosperous, and beloved.

"Nor did he change; but kept in lofty placeThe wisdom which adversity had bred,"

till suddenly he is plunged into the mire, and falsifies all his past, and ruins for ever, by the sin of his mature age, his peace of heart and the prosperity of his kingdom. Thenceforward trouble is never far away; and his later years are shaded with the saddening consciousness of his great fault, as well as by hatred and rebellion and murder in his family, and discontent and alienation in his kingdom.

None of the great men of Scripture pass through a course of so many changes; none of them touched human life at so many points; none of them were so tempered and polished by swift alternation of heat and cold, by such heavy blows and the friction of such rapid revolutions. Like his great Son and Lord, though in a lower sense, he, too, must be "in all points tempted like as we are," that his words may be fitted for the solace and strength of the whole world. Poets "learn in suffering what they teach in song." These quick transitions of fortune, and this wide experience, are the many-coloured threads from which the rich web of his psalms is woven.

And while the life is singularly varied, the character is also singularly full and versatile....