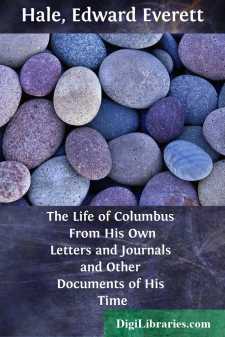 CHAPTER I. — EARLY LIFE OF COLUMBUS.

HIS BIRTH AND BIRTH-PLACE—HIS EARLY EDUCATION—HIS EXPERIENCE AT SEA—HIS MARRIAGE AND RESIDENCE IN LISBON—HIS PLANS FOR THE DISCOVERY OF A WESTWARD PASSAGE TO THE INDIES.

Christopher Columbus was born in the Republic of Genoa. The honor of his birth-place has been claimed by many villages in that Republic, and the house in which he was born cannot be now pointed out with certainty. But the best authorities agree that the children and the grown people of the world have never been mistaken when they have said: "America was discovered in 1492 by Christopher Columbus, a native of Genoa."

His name, and that of his family, is always written Colombo, in the Italian papers which refer to them, for more than one hundred years before his time. In Spain it was always written Colon; in France it is written as Colomb; while in England it has always kept its Latin form, Columbus. It has frequently been said that he himself assumed this form, because Columba is the Latin word for "Dove," with a fanciful feeling that, in carrying Christian light to the West, he had taken the mission of the dove. Thus, he had first found land where men thought there was ocean, and he was the messenger of the Holy Spirit to those who sat in darkness. It has also been assumed that he took the name of Christopher, "the Christ-bearer," for similar reasons. But there is no doubt that he was baptized "Christopher," and that the family name had long been Columbo. The coincidences of name are but two more in a calendar in which poetry delights, and of which history is full.

Christopher Columbus was the oldest son of Dominico Colombo and Suzanna Fontanarossa. This name means Red-fountain. He bad two brothers, Bartholomew and Diego, whom we shall meet again. Diego is the Spanish way of writing the name which we call James.

It seems probable that Christopher was born in the year 1436, though some writers have said that he was older than this, and some that he was younger. The record of his birth and that of his baptism have not been found.

His father was not a rich man, but he was able to send Christopher, as a boy, to the University of Pavia, and here he studied grammar, geometry, geography and navigation, astronomy and the Latin language. But this was as a boy studies, for in his fourteenth year he left the university and entered, in hard work, on "the larger college of the world." If the date given above, of his birth, is correct, this was in the year 1450, a few years before the Turks took Constantinople, and, in their invasion of Europe, affected the daily life of everyone, young or old, who lived in the Mediterranean countries. From this time, for fifteen years, it is hard to trace along the life of Columbus. It was the life of an intelligent young seaman, going wherever there was a voyage for him. He says himself, "I passed twenty-three years on the sea. I have seen all the Levant, all the western coasts, and the North. I have seen England; I have often made the voyage from Lisbon to the Guinea coast." This he wrote in a letter to Ferdinand and Isabella....