The Life of Cicero Volume II. 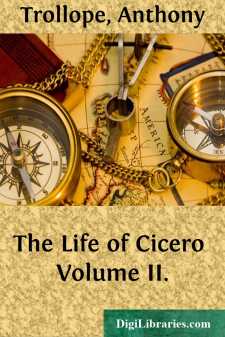 Chapter I. HIS RETURN FROM EXILE.

Cicero's life for the next two years was made conspicuous by a series of speeches which were produced by his exile and his return. These are remarkable for the praise lavished on himself, and by the violence with which he attacked his enemies. It must be owned that never was abuse more abusive, or self-praise uttered in language more laudatory. Cicero had now done all that was useful in his public life. The great monuments of his literature are to come. None of these had as yet been written except a small portion of his letters—about a tenth—and of these he thought no more in regard to the public than do any ordinary letter-writers of to-day. Some poems had been produced, and a history of his own Consulship in Greek; but these are unknown to us. He had already become the greatest orator, perhaps, of all time—and we have many of the speeches spoken by him. Some we have—those five, namely, telling the story of Verres—not intended to be spoken, but written for the occasion of the day rather than with a view to permanent literature. He had been Quæstor, Ædile, Prætor, and Consul, with singular and undeviating success. He had been honest in the exercise of public functions when to be honest was to be singular. He had bought golden opinions from all sorts of people. He had been true to his country, and useful also—a combination which it was given to no other public man of those days to achieve. Having been Prætor and Consul, he had refused the accustomed rewards, and had abstained from the provinces. His speeches, with but few exceptions, had hitherto been made in favor of honesty. They are declamations against injustice, against bribery, against cruelty, and all on behalf of decent civilized life. Had he died then, he would not have become the hero of literature, the marvel among men of letters whom the reading world admires; but he would have been a great man, and would have saved himself from the bitterness of Cæsarean tongues.

His public work was in truth done. His further service consisted of the government of Cilicia for a year—an employment that was odious to him, though his performance of it was a blessing to the province. After that there came the vain struggle with Cæsar, the attempt to make the best of Cæsar victorious, the last loud shriek on behalf of the Republic, and then all was over. The fourteen years of life which yet remained to him sufficed for erecting that literary monument of which I have spoken, but his public usefulness was done. To the reader of his biography it will seem that these coming fourteen years will lack much of the grace which adorned the last twenty. The biographer will be driven to make excuses, which he will not do without believing in the truth of them, but doubting much whether he may beget belief in others. He thinks that he can see the man passing from one form to another—his doubting devotion to Pompey, his enforced adherence to Cæsar, his passionate opposition to Antony; but he can still see him true to his country, and ever on the alert against tyranny and on behalf of pure patriotism....