The Life and Times of John Wilkins Warden of Wadham college, Oxford; master of Trinity college, Cambridge; and Bishop of Chester 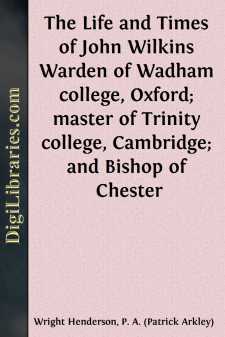 CHAPTER I. HISTORY OF THE COLLEGE FROM ITS FOUNDATION TO THE BEGINNING OF WILKINS' WARDENSHIP.

Wadham College was founded in 1610, when on July 31st the foundation-stone was laid; and opened in 1613, when, on April 20th, the Warden and Fellows elected by the Foundress were admitted; the Warden, by the Vice-Chancellor of the University in St Mary's Church; the fifteen Fellows by the Warden in the College Hall; the fifteen Scholars by the Warden and Fellows in the same place. All of them, from the Warden to the Junior Scholars, were sworn to obey the Statutes of the College, save three of the Scholars, who were supposed to be too young to understand the nature of an oath.

A site had been found on the ground where had stood the Priory of the Augustine Friars, founded in 1268—suppressed in 1540. It had been gradually removed or destroyed by time and plunder of its materials: no traces of it are left, except on the west side of the Warden's garden, a postern-gate which he maintains was used by the friars for various purposes. Another memorial of the Priory survived till 1800—the phrase of "doing Austins." Up to that date, or near it, every Bachelor of Arts was required once in each year to "dispute and answer ad Augustinenses," and the chapel or refectory of the Priory were convenient places in which to hold the disputations. In the University no official title, no name indeed of any kind, escapes abbreviation or worse indignity, instances of which will readily suggest themselves to the mind of any Oxford reader.

The founders were Nicholas Wadham and Dorothy, his wife, of Merrifield and Edge in the county of Somerset. He was a squire of good estate and high degree, the last male descendant of the main line of Wadhams. Born in 1532, he was educated at Corpus or at Christ Church: there is a conflict of testimony on this point, but Corpus was probably his college. At the age of twenty-three he married Dorothy Petre. She was two years younger than her husband, born in 1534, the daughter of Sir William Petre of Writtle in Essex, near which much of the College property now lies. For his zeal in suppressing the monasteries Sir William had been rewarded by the grant of a large estate, and Wadham, so long a Whig and Evangelical College, was by the vicissitudes of fortune built both pecuniarily and materially on the ruins of the Roman Catholic Church.

The young couple were wealthy and lived their lives in state at Merrifield, where they kept an open house, "an inn at all times for their friends, and a court at Christmas." Yet, owing probably to the management of Dorothy, a notable and prudent wife, they saved money, and the childless pair determined to devote their wealth to "the purposes of religion, learning, and education." Their creed, like that of many waverers in those days of transition, was by no means clear, possibly even to themselves. The Wadhams were suspected of being Recusants, and Dorothy was presented as such, even in the year 1613 when the College was completed. This may have given rise to Antony Wood's story that Nicholas was minded to found a College at Venice for Roman Catholic students, but the balance of probabilities is against its truth.

It has been pointed out by Mr Jackson, on the suggestion of Mr Thorley, the late Warden, that "the discovery of the Gunpowder Plot in 1605 may have weakened his (Wadham's) attachment, in common with that of many liberal and loyal Catholics, to the cause of the old faith"; further, that "the Venice scheme comes very near, if it does not amount to, an offence which the law had anticipated and actually forbidden, and it would have exposed its author to the direful penalties of Pramunire, which by a Statute of 27 Elizabeth were denounced against any person contributing to the support of any College of Jesuits, or Seminary, erected, or hereafter to be erected, beyond the sea": and finally, Mr Jackson dwells on many evidences from facts that the Founder was in his later years strictly conformable to the Reformed Church....