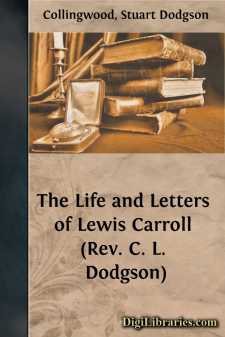 Add to My Favorites
Published: 8 years ago
Downloads: 74
Rating: (0 Votes)

The Dodgsons appear to have been for a long time connected with the north of England, and until quite recently a branch of the family resided at Stubb Hall, near Barnard Castle.

In the early part of the last century a certain Rev. Christopher Dodgson held a living in Yorkshire. His son, Charles, also took Holy Orders, and was for some time tutor to a son of the then Duke of Northumberland. In 1762 his patron presented him to the living of Elsdon, in Northumberland, by no means a desirable cure, as Mr. Dodgson discovered. The following extracts from his letters to various members of the Percy family are interesting as giving some idea of the life of a rural clergyman a hundred years ago:

I am obliged to you for promising to write to me, but don't give yourself the trouble of writing to this place, for 'tis almost impossible to receive 'em, without sending a messenger 16 miles to fetch 'em.'Tis impossible to describe the oddity of my situation at present, which, however, is not void of some pleasant circumstances.A clogmaker combs out my wig upon my curate's head, by way of a block, and his wife powders it with a dredging-box.The vestibule of the castle (used as a temporary parsonage) is a low stable; above it the kitchen, in which are two little beds joining to each other. The curate and his wife lay in one, and Margery the maid in the other. I lay in the parlour between two beds to keep me from being frozen to death, for as we keep open house the winds enter from every quarter, and are apt to sweep into bed to me.Elsdon was once a market town as some say, and a city according to others; but as the annals of the parish were lost several centuries ago, it is impossible to determine what age it was either the one or the other.There are not the least traces of the former grandeur to be found, whence some antiquaries are apt to believe that it lost both its trade and charter at the Deluge.... There is a very good understanding between the parties [he is speaking of the Churchmen and Presbyterians who lived in the parish], for they not only intermarry with one another, but frequently do penance together in a white sheet, with a white wand, barefoot, and in the coldest season of the year. I have not finished the description for fear of bringing on a fit of the ague. Indeed, the ideas of sensation are sufficient to starve a man to death, without having recourse to those of reflection.If I was not assured by the best authority on earth that the world is to be destroyed by fire, I should conclude that the day of destruction is at hand, but brought on by means of an agent very opposite to that of heat.I have lost the use of everything but my reason, though my head is entrenched in three night-caps, and my throat, which is very bad, is fortified by a pair of stockings twisted in the form of a cravat....
Show more
Show less