The Life and Death of Richard Yea-and-Nay 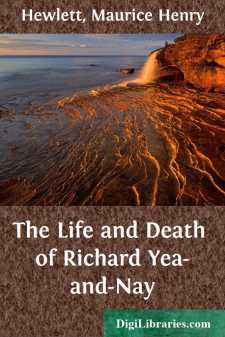 OF COUNT RICHARD, AND THE FIRES BY NIGHT

I choose to record how Richard Count of Poictou rode all through one smouldering night to see Jehane Saint-Pol a last time. It had so been named by the lady; but he rode in his hottest mood of Nay to that, yet careless of first or last so he could see her again. Nominally to remit his master's sins, though actually (as he thought) to pay for his own, the Abbot Milo bore him company, if company you can call it which left the good man, in pitchy dark, some hundred yards behind. The way, which was long, led over Saint Andrew's Plain, the bleakest stretch of the Norman march; the pace, being Richard's, was furious, a pounding gallop; the prize, Richard's again, showed fitfully and afar, a twinkling point of light. Count Richard knew it for Jehane's torch, and saw no other spark; but Milo, faintly curious on the lady's account, was more concerned with the throbbing glow which now and again shuddered in the northern sky. Nature had no lamps that night, and made no sign by cry of night-bird or rustle of scared beast: there was no wind, no rain, no dew; she offered nothing but heat, dark, and dense oppression. Topping the ridge of sand, where was the Fosse des Noyées, place of shameful death, the solitary torch showed a steady beam; and there also, ahead, could be seen on the northern horizon that rim of throbbing light.

'God pity me!' said gasping Milo; 'I believe my stomach is in my head.' So at last they crossed the pebbly ford and found the pines, then cantered up the path of light which streamed from the Dark Tower. As core of this they saw the lady stand with a torch above her head; when they drew rein she did not move. Her face, moon-shaped, was as pale as a moon; her loose hair, catching light, framed it with gold. She was all white against the dark, seemed to loom in it taller than she was or could have been. She was Jehane Saint-Pol, Jehane 'of the Fair Girdle,' so called by her lovers and friends, to whom for a matter of two years this hot-coloured, tallest, and coldest of the Angevins had been light of the world.

The check upon their greeting was the most curious part of a curious business, that one should have travelled and the other watched so long, and neither urge the end of desire. The Count sat still upon his horse, so for duty's sake did the aching abbot; the girl stood still in the entry-way, holding up her dripping torch. Then, 'Child, child,' cried the Count, 'how is it with thee?' His voice trembled, and so did he.

She looked at him, slow to answer, though the hand upon her bosom swayed up and down.

'Do you see the fires?' she said. 'They have been there six nights.' He was watching them then through the pine-woods, how they shot into the sky great ribbons of light, flickered, fainted out, again glowed steadily as if gathering volume, again leaped, again died, ebbing and flowing like a tide of fire.

'The King will be at Louviers,' said Richard. He gave a short laugh. 'Well, he shall light us to bed....