The Lieutenant-Governor A Novel 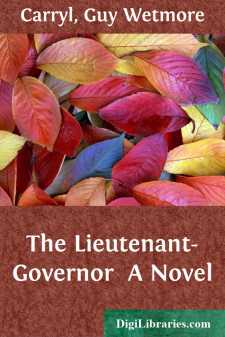 THE FLY ON THE WHEEL

The offices of the Governor and the Lieutenant-Governor adjoined. Each had its ante-room, in which a private secretary wrote eternally at a roll-top desk, an excessively plain-featured stenographer rattled the keys of his typewriter, and a smug-faced page yawned over a newspaper, or scanned the cards of visitors with the air of an official censor. At intervals, an electric bell whirred once, twice, or three times; and, according to the signal, one of the trio disappeared into the presence of the august personage within.

A door connected the office of the chief executive with that of his lieutenant, but this was rarely opened by either, and then only after a formal tap and permission to enter had been given. It was a matter of general knowledge that the Governor and the Lieutenant-Governor were not in sympathy; but few, even among the intimates of either, were aware how deep, and wide, and hopelessly impassable was the gulf which lay between them. This was due not alone to disparity in age, though twenty-eight years separated the white-haired Governor from his handsome subordinate, who had been nominated to this, his first public office, on his thirtieth birthday; nor was it wholly a difference between the experience of the one and the inexperience of the other. The point of view of the veteran is, naturally, not that of the novice, particularly in politics. That the enthusiasms of Lieutenant-Governor Barclay should have been the disillusions of Governor Abbott, and his pitfalls his senior's stepping-stones,—this was to be expected. The root of their dissimilarity lay deeper. It was nothing less than mutual distrust which kept the connecting door closed day after day, and clogged the channel of coöperation with the sharp-pointed boulders of antagonism.

The convention which nominated the successful ticket of the preceding year had been a veritable chaos of contending factions. The labor delegates, encouraged by the unexpected strength of their representation, were not content with such nominal plums as had fallen to their share in former conventions. Led by Michael McGrath, an agitator whose native Irish eloquence, made keener and more persuasive by practice in bar-room forensics, brought him naturally to the fore, they threatened, at one stage of the proceedings, to carry all before them. The more conservative faction, its strength sapped by the formation, in its very ranks, of a reform party determined upon the fall of the "machine," was forced to yield ground. The reformers themselves, young men for the most part, distinguished by great ideals but small ability, were too few to impose their individual will upon their opponents, yet sufficiently numerous to make their support necessary to the success of either party. The usual smooth course of the convention, upset by this unlooked-for resistance from two quarters, staggered helplessly, and was on the point of coming to a deadlock. It was Michael McGrath's shrewd perception of the situation which solved the problem....