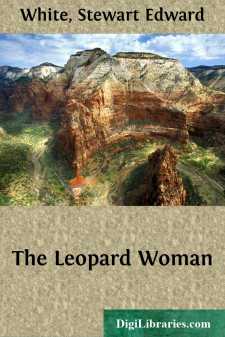 CHAPTER I THE MARCH

It was the close of the day. Over the baked veldt of Equatorial Africa a safari marched. The men, in single file, were reduced to the unimportance of moving black dots by the tremendous sweep of the dry country stretching away to a horizon infinitely remote, beyond which lay single mountains, like ships becalmed hull-down at sea. The immensities filled the world— the simple immensities of sky and land. Only by an effort, a wrench of the mind, would a bystander on the advantage, say, of one of the little rocky, outcropping hills have been able to narrow his vision to details.

And yet details were interesting. The vast shallow cup to the horizon became a plain sparsely grown with flat-topped thorn trees. It was not a forest, yet neither was it open country. The eye penetrated the thin screen of tree trunks to the distance of half a mile or more, but was brought to a stop at last. Underfoot was hard-baked earth, covered by irregular patches of shale that tinkled when stepped on. Well-defined paths, innumerable, trodden deep and hard, cut into the iron soil. They nearly all ran in a northwesterly direction. The few traversing paths took a long slant. These paths, so exactly like those crossing a village green, had in all probability never been trodden by human foot. They had been made by the game animals, the swarming multitudinous game of Central Africa.

The safari was using one of the game trails. It was a compact little safari, comprising not over thirty men all told. The single white man walked fifty yards or so ahead of the main body. He was evidently tired, for his shoulders drooped, and his shuffling, slow-swinging gait would anywhere have been recognized by children of the wilderness as that which gets the greatest result from the least effort. Dressed in the brown cork helmet, the brown flannel shirt with spine-pad, the khaki trousers, and the light boots of the African traveller little was to be made of either his face or figure. The former was fully bearded, the latter powerful across the shoulders. His belt was heavy with little leather pockets; a pair of prismatic field-glasses, suspended from a strap around his neck, swung across his chest; in the crook of his left arm he carried a light rifle.

Immediately at his heels followed a native. This man's face was in conformation that of the typical negro; but there the resemblance ceased. Behind the features glowed a proud, fierce spirit that transformed them. His head was high but his eyes roved from right to left restlessly, never still save when they paused for a flickering instant to examine some gazelle, some distant herd of zebra or wildebeeste standing in the vista of the flat-topped trees. His nostrils slowly expanded and contracted with his breathing, as do those of a spirited horse. In contrast to the gait of the white man he stepped vigorously and proudly as though the long day had not touched his strength. He wore a battered old felt hat, a tattered flannel shirt, a ragged pair of shorts, and the blue puttees issued by the British to their native troops....