The Last Twelve Verses of the Gospel According to S. Mark 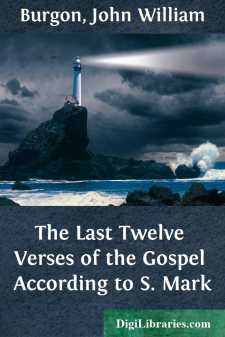 I do myself the honour of inscribing this volume to you. Permit me to explain the reason why.

It is not merely that I may give expression to a sentiment of private friendship which dates back from the pleasant time when I was Curate to your Father,—whose memory I never recall without love and veneration;—nor even in order to afford myself the opportunity of testifying how much I honour you for the noble example of conscientious uprightness and integrity which you set us on a recent public occasion. It is for no such reason that I dedicate to you this vindication of the last Twelve Verses of the Gospel according to S. Mark.

It is because I desire supremely to submit the argument contained in the ensuing pages to a practised judicial intellect of the loftiest stamp. Recent Editors of the New Testament insist that these “last Twelve Verses” are not genuine. The Critics, almost to a man, avow themselves of the same opinion. Popular Prejudice has been for a long time past warmly enlisted on the same side. I am as convinced as I am of my life, that the reverse is the truth. It is not even with me as it is with certain learned friends of mine, who, admitting the adversary’s premisses, content themselves with denying the validity of his inference. However true it may be,—and it is true,—that from those premisses the proposed conclusion does not follow, I yet venture to deny the correctness of those premisses altogether. I insist, on the contrary, that the Evidence relied on is untrustworthy,—untrustworthy in every particular.

How, in the meantime, can such an one as I am hope to persuade the world that it is as I say, while the most illustrious Biblical Critics at home and abroad are agreed, and against me? Clearly, the first thing to be done is to secure for myself a full and patient hearing. With this view, I have written a book. But next, instead of waiting for the slow verdict of Public Opinion, (which yet, I know, must come after many days,) I desiderate for the Evidence I have collected, a competent and an impartial Judge. And that is why I dedicate my book to you. If I can but get this case fairly tried, I have no doubt whatever about the result.

Whether you are able to find time to read these pages, or not, it shall content me to have shewn in this manner the confidence with which I advocate my cause; the kind of test to which I propose to bring my reasonings. If I may be allowed to say so,—S. Mark’s last Twelve Verses shall no longer remain a subject of dispute among men. I am able to prove that this portion of the Gospel has been declared to be spurious on wholly mistaken grounds: and this ought in fairness to close the discussion. But I claim to have done more. I claim to have shewn, from considerations which have been hitherto overlooked, that its genuineness must needs be reckoned among the things that are absolutely certain.