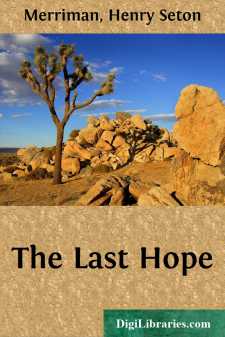 "There; that's it. That's where they buried Frenchman," said Andrew—known as River Andrew. For there was another Andrew who earned his living on the sea.

River Andrew had conducted the two gentlemen from "The Black Sailor" to the churchyard by their own request. A message had been sent to him in the morning that this service would be required of him, to which he had returned the answer that they would have to wait until the evening. It was his day to go round Marshford way with dried fish, he said; but in the evening they could see the church if they still set their minds on it.

River Andrew combined the light duties of grave-digger and clerk to the parish of Farlingford in Suffolk with a small but steady business in fish of his own drying, nets of his own netting, and pork slain and dressed by his own weather-beaten hands.

For Farlingford lies in that part of England which reaches seaward toward the Fatherland, and seems to have acquired from that proximity an insatiable appetite for sausages and pork. On these coasts the killing of pigs and the manufacture of sausages would appear to employ the leisure of the few, who for one reason or another have been deemed unfit for the sea. It is not our business to inquire why River Andrew had never used the fickle element. All that lay in the past. And in a degree he was saved from the disgrace of being a landsman by the smell of tar and bloaters that heralded his coming, by the blue jersey and the brown homespun trousers which he wore all the week, and by the saving word which distinguished him from the poor inland lubbers who had no dealings with water at all.

He had this evening laid aside his old sou'wester—worn in fair and foul weather alike—for his Sunday hat. His head-part was therefore official and lent additional value to the words recorded. He spoke them, moreover, with a dim note of aggressiveness which might only have been racy of a soil breeding men who are curt and clear of speech. But there was more than an East Anglian bluffness in the statement and the manner of its delivery, as his next observation at once explained.

"Passen thinks it's over there by the yew-tree—but he's wrong. That there one was a wash-up found by old Willem the lighthouse keeper one morning early. No! this is where Frenchman was laid by."

He indicated with the toe of his sea-boot a crumbling grave which had never been distinguished by a headstone. The grass grew high all over Farlingford churchyard, almost hiding the mounds where the forefathers slept side by side with the nameless "wash-ups," to whom they had extended a last hospitality.

River Andrew had addressed his few remarks to the younger of his two companions, a well-dressed, smartly set-up man of forty or thereabouts, who in turn translated the gist of them into French for the information of his senior, a little white-haired gentleman whom he called "Monsieur le Marquis."

He spoke glibly enough in either tongue, with a certain indifference of manner....