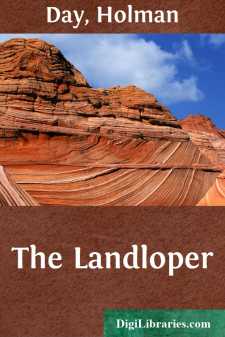 IN THE DUST OF THE LONG HIGHWAY

The man who called himself Walker Farr plodded down the dusty stretches of a country road.

He moved leisurely. He neither slouched like a vagabond nor did he swing with a stride which indicated that he had aim in life or destination in mind. When he came under arching elms he plucked his worn cap from his head and stuffed it into a coat pocket which already bulged bulkily against his flank. He gazed to right and left upon the glories of a sun-bathed June morning and strolled bareheaded along the aisle of a temple of the great Out-of-Doors.

He was young and stalwart and sunburnt.

A big, gray automobile squawked curt warning behind him and then swept past and on its way, kicking dust upon him from its whirring wheels.

He gave the car only an indifferent glance, but, as he walked on, he was conscious that out of the blur of impressions the memory of a girl's profile lingered.

A farmer-man who had come to the end of a row in a field near the highway fence leaned on his hoe-handle and squinted against the sun at the face of the passer-by. Then the farmer shifted his gaze to the stranger's clothing and scowled. The face was the countenance of a man who was somebody; the clothing was the road-worn garb of a vagrant.

"Here, you!" called the farmer.

"I hear you," said the man who called himself Walker Farr, smiling and putting subtle insolence into the smile.

"Chopping down well-holes that have been turned inside out by a cyclone."

The man in the highway flashed a wonderful smile at the farmer and passed on. The farmer blinked and then he scowled more savagely. He climbed the fence and followed, carrying his hoe.

"Look here, you! There ain't no such business."

"Send for me next time you have a well turned wrong side out and I'll prove it."

"You're a tramp, and here's what we are doing to tramps in this county right now!"

Beyond them in the highway men were delving with shovels and hacking with mattocks. The men wore blue drilling overalls, obtrusively new, and their faces were pasty pale.

"We have taken 'em out of jail and put 'em doing honest work," said the farmer. He pointed to guards who were marching to and fro with rifles in the hook of their arms. "Here's where you belong. I'm a constable of this town. I arrest you."

The young man halted. His smile became provokingly compassionate as he stared down at the nickel badge the farmer was tapping.

"So you represent the law, do you?" inquired Farr.

"It's too bad you don't know more about the law, then. I have neither solicited alms, trespassed on private property, begged food, nor committed crime in your little kingdom, my good and great three-tailed bashaw. Here is a coin to clear the law." He exhibited a silver piece. "I am sorry I cannot remain here and help you mend your ways—they seem to need it!"

He went on past the sullen gang of pick and shovel, treading the middle of the broad turnpike....