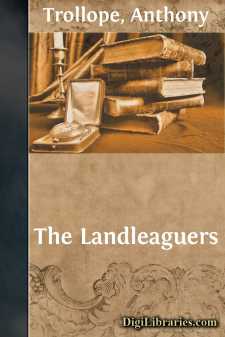 In the year 1850 the two estates of Ballintubber and Morony were sold to Mr. Philip Jones, under the Estates Court, which had then been established. They had been the property of two different owners, but lay conveniently so as to make one possession for one proprietor. They were in the County Galway, and lay to the right and left of the road which runs down from the little town of Headford to Lough Corrib. At the time when the purchase was made there was no quieter spot in all Ireland, or one in which the lawful requirements of a landlord were more readily performed by a poor and obedient tenantry. The people were all Roman Catholics, were for the most part uneducated, and it may be said of them that not only were their souls not their own, but that they were not ambitious even of possessing their own bodies. Circumstances have changed much with them since that date. Not only have they in part repudiated the power of the priest as to their souls, but, in compliance with teaching which has come to them from America, they claim to be masters also of their bodies. Never were a people less fitted to exercise such dominion without control. Generous, kindly, impulsive, and docile, they have been willing to follow any recognised leader. When Philip Jones bought the property that had belonged to the widow O'Dwyer—for Ballintubber had for the last hundred years been the property of the O'Dwyers—and Morony, which, had been an outlying town-land belonging to the Hacketts for the last two centuries, he had at first been looked down upon as a new comer. But all that had passed by, and Mr. Jones was as much respected as though he had been an O'Jones from the time of Queen Elizabeth. But now the American teaching had come up, and things were different.

Mr. Jones had expended over £30,000 in purchasing the property, and was congratulated by all men on having done well with his money. There were some among his friends in England—and his friends were all English—who had told him that he was incurring a great risk in going into so distant and wild a country. But it was acknowledged that he could not in England have obtained so good a return in the way of rent. And it was soon found that the opportunities for improving the property were many and close at hand. At the end of ten years all men who knew Mr. Jones personally, or had seen the increasing comforts of Morony Castle, declared that, as he liked the kind of life, he had done uncommonly well for himself.

Nor had he done badly for his three married sisters, each of whom had left £4,000 in his hands. All the circumstances of the Miss Jones's as they had been, it will be here unnecessary to explain. Since Philip had become owner of Morony Castle, each of them had married, and the three brothers-in-law were equally well satisfied with the investment of their money. It will, however, thus be understood that the property did not belong entirely to Mr. Jones, and that the brothers-in-law and their wives were part owners....