The Land of Midian - Volume 2 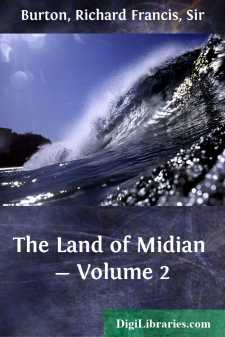 We have now left the region explored by Europeans; and our line to the south and the south-east will lie over ground wholly new. In front of us the land is no longer Arz Madyan: we are entering South Midian, which will extend to El-Hejáz. As the march might last longer than had been expected, I ordered fresh supplies from El-Muwaylah to meet us in the interior viâ Zibá. A very small boy acted dromedary-man; and on the next day he reached the fort, distant some thirty-five and a half direct geographical miles eastward with a trifling of northing.

We left the Jayb el-Khuraytah on a delicious morning (6.15 a.m., February 26th), startling the gazelles and the hares from their breakfast graze.

The former showed in troops of six; and the latter were still breeding, as frequent captures of the long-eared young proved. The track lay down the Wady Dahal and other influents of the great Wady Sa'lúwwah, a main feeder of the Dámah. We made a considerable détour between south-south-east and south-east to avoid the rocks and stones discharged by the valleys of the Shafah range on our left. To the right rose the Jibál el-Tihámah, over whose nearer brown heights appeared the pale blue peaks of Jebel Shárr and its southern neighbour, Jebel Sa'lúwwah.

At nine a.m. we turned abruptly eastward up the Wady el-Sulaysalah, whose head falls sharply from the Shafah range. The surface is still Hismá ground, red sand with blocks of ruddy grit, washed down from the plateau on the left; and, according to Furayj, it forms the south-western limit of the Harrah. The valley is honeycombed into man-traps by rats and lizards, causing many a tumble, and notably developing the mulish instinct. We then crossed a rough and rocky divide, Arabicè a Majrá, or, as the Bedawin here pronounce it, a "Magráh,"[EN#1] which takes its name from the tormented Ruways ridge on the right. After a hot, unlively march of four hours (= eleven miles), on mules worn out by want of water, we dismounted at a queer isolated lump on the left of the track. This Jebel el-Murayt'bah ("of the Little Step") is lumpy grey granite of the coarsest elements, whose false strata, tilted up till they have become quasi-vertical, and worn down to pillars and drums, crown the crest like gigantic columnar crystallizations. We shall see the same freak of nature far more grandly developed into the "Pins" of the Shárr. It has evidently upraised the trap, of which large and small blocks are here and there imbedded in it. The granite is cut in its turn by long horizontal dykes of the hardest quadrangular basalt, occasionally pudding'd with banded lumps of red jasper and oxydulated iron: from afar they look like water-lines, and in places they form walls, regular as if built. The rounded forms result from the granites flaking off in curved laminæ, like onion-coats. Want of homogeneity in the texture causes the granite to degrade into caves and holes: the huge blocks which have fallen from the upper heights often show unexpected hollows in the under and lower sides. Above the water we found an immense natural dolmen, under which apparently the Bedawin take shelter. After El-Murayt'bah the regular granitic sequence disappears, nor will it again be visible till we reach Shaghab (March 2nd).

About noon we remounted and rounded the south of the block, disturbing by vain shots two fine black eagles. I had reckoned upon the "Water of El-Murayt'bah," in order to make an exceptional march after so many days of deadly slow going. But the cry arose that the rain-puddle was dry....