The Land of Midian - Volume 1 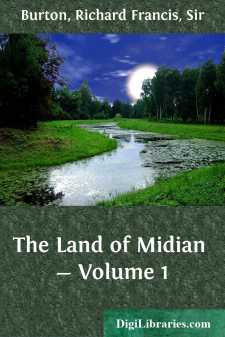 A few pages by way of "Forespeache."

The plain unvarnished tale of the travel in Midian, undertaken by the second Expedition, which, like the first, owes all to the liberality and the foresight of his Highness Ismail I., Khediv of Egypt, forms the subject of these volumes. During the four months between December 19, 1877, and April 20, 1878, the officers employed covered some 2500 miles by sea and land, of which 600, not including by-paths, were mapped and planned; and we brought back details of an old-new land which the civilized world had clean forgotten.

The public will now understand that one and the same subject has not given rise to two books. I have to acknowledge with gratitude the many able and kindly notices by the Press of my first volume ("The Gold Mines of Midian," etc. Messrs. C. Kegan Paul & Co., 1878). But some reviewers succeeded in completely misunderstanding the drift of that avant courier. It was an introduction intended to serve as a base for the present more extensive work, and—foundations intended to bear weight must be solid. Its object was to place before the reader the broad outlines of a country whose name was known to "every schoolboy," whilst it was a vox et praeterea nihil, even to the learned, before the spring of 1877. I had judged advisable to sketch, with the able assistance of learned friends, its history and geography; its ethnology and archaeology; its zoology and malacology; its botany and geology. The drift was to prepare those who take an interest in Arabia generally, and especially in wild mysterious Midian, for the present work, which, one foresaw, would be a tale of discovery and adventure. Thus readers of "The Land of Midian (Revisited)" may feel that they are not standing upon ground utterly unknown; and the second publication is shortened and lightened—perhaps the greatest advantage of all—by the prolegomena having been presented in the first.

The purpose of the last Expedition was to conclude the labours begun, during the spring of 1877, in a mining country unknown, or rather, fallen into oblivion. Hence its primary "objective" was mineralogical. The twenty-five tons of specimens, brought back to Cairo, were inspected by good judges from South Africa, Australia, and California; and all recognized familiar metalliferous rocks. The collection enabled me to distribute the mining industry into two great branches—(1) the rich silicates and carbonates of copper smelted by the Ancients in North Midian; and (2) the auriferous veins worked, but not worked out, by comparatively modern races in South Midian, the region lying below the parallel of El-Muwaylah. It is, indeed, still my conviction that "tailings" have been washed for gold, even by men still living. We also brought notices and specimens of three several deposits of sulphur; of a turquoise-mine behind Ziba; of salt and saltpetre, and of vast deposits of gypsum. These are sources of wealth which the nineteenth century is not likely to leave wasted and unworked.

In geography the principal novelties are the identification of certain ruined cities mentioned by Ptolemy, and the "Harrahs" or plutonic centres scattered over the seaboard and the interior....