The Lady of the Barge and Others, Entire Collection 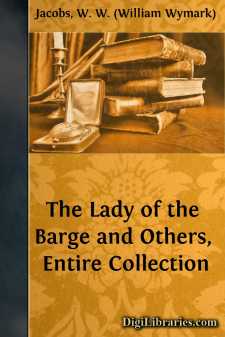 THE LADY OF THE BARGE

The master of the barge Arabella sat in the stern of his craft with his right arm leaning on the tiller. A desultory conversation with the mate of a schooner, who was hanging over the side of his craft a few yards off, had come to a conclusion owing to a difference of opinion on the subject of religion. The skipper had argued so warmly that he almost fancied he must have inherited the tenets of the Seventh-day Baptists from his mother while the mate had surprised himself by the warmth of his advocacy of a form of Wesleyanism which would have made the members of that sect open their eyes with horror. He had, moreover, confirmed the skipper in the error of his ways by calling him a bargee, the ranks of the Baptists receiving a defender if not a recruit from that hour.

With the influence of the religious argument still upon him, the skipper, as the long summer's day gave place to night, fell to wondering where his own mate, who was also his brother-in-law, had got to. Lights which had been struggling with the twilight now burnt bright and strong, and the skipper, moving from the shadow to where a band of light fell across the deck, took out a worn silver watch and saw that it was ten o'clock.

Almost at the same moment a dark figure appeared on the jetty above and began to descend the ladder, and a strongly built young man of twenty-two sprang nimbly to the deck.

"That 'll do," said the skipper, in a somewhat loud voice, as he noticed that his late adversary still occupied his favourite strained position, and a fortuitous expression of his mother's occurred to him: "Don't talk to me; I've been arguing with a son of Belial for the last half-hour."

"Bargee," said the son of Belial, in a dispassionate voice.

"Don't take no notice of him, Ted," said the skipper, pityingly.

"He wasn't talking to me," said Ted. "But never mind about him; I want to speak to you in private."

"Fire away, my lad," said the other, in a patronizing voice.

"Speak up," said the voice from the schooner, encouragingly. "I'm listening."

There was no reply from the bargee. The master led the way to the cabin, and lighting a lamp, which appealed to more senses than one, took a seat on a locker, and again requested the other to fire away.

"Well, you see, it's this way," began the mate, with a preliminary wriggle: "there's a certain young woman—"

"A certain young what?" shouted the master of the Arabella.

"Woman," repeated the mate, snappishly; "you've heard of a woman afore, haven't you? Well, there's a certain young woman I'm walking out with I—"

"You would ha' done if you'd been better looking, p'raps," retorted the other. "Well, I've offered this young woman to come for a trip with us."

"Oh, you have, 'ave you!" said the skipper, sharply. "And what do you think Louisa will say to it?"