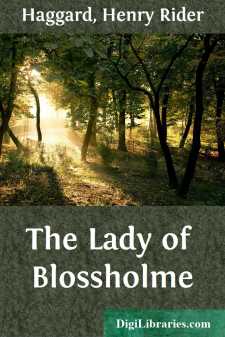 Who that has ever seen them can forget the ruins of Blossholme Abbey, set upon their mount between the great waters of the tidal estuary to the north, the rich lands and grazing marshes that, backed with woods, border it east and south, and to the west by the rolling uplands, merging at last into purple moor, and, far away, the sombre eternal hills! Probably the scene has not changed very much since the days of Henry VIII, when those things happened of which we have to tell, for here no large town has arisen, nor have mines been dug or factories built to affront the earth and defile the air with their hideousness and smoke.

The village of Blossholme we know has scarcely varied in its population, for the old records tell us this, and as there is no railway here its aspect must be much the same. Houses built of the local grey stone do not readily fall down. The folk of that generation walked in and out of the doorways of many of them, although the roofs for the most part are now covered with tiles or rough slates in place of reeds from the dike. The parish wells also, fitted with iron pumps that have superseded the old rollers and buckets, still serve the place with drinking-water as they have done since the days of the first Edward, and perhaps for centuries before.

Although their use, if not their necessity, has passed away, not far from the Abbey gate the stocks and whipping-post, the latter arranged with three sets of iron loops fixed at different heights and of varying diameters to accommodate the wrists of man, woman, and child, may still be found in the middle of the Priests' Green. These stand, it will be remembered, under a quaint old roof supported on rough, oaken pillars, and surmounted by a weathercock which the monkish fancy has fashioned to the shape of the archangel blowing the last trump. His clarion or coach-horn, or whatever instrument of music it was he blew, has vanished. The parish book records that in the time of George I a boy broke it off, melted it down, and was publicly flogged in consequence, the last time, apparently, that the whipping-post was used. But Gabriel still twists about as manfully as he did when old Peter, the famous smith, fashioned and set him up with his own hand in the last year of King Henry VIII, as it is said to commemorate the fact that on this spot stood the stakes to which Cicely Harflete, Lady of Blossholme, and her foster-mother, Emlyn, were chained to be burned as witches.

So it is with everything at Blossholme, a place that Time has touched but lightly. The fields, or many of them, bear the same names and remain identical in their shape and outline. The old farmsteads and the few halls in which reside the gentry of the district, stand where they always stood. The glorious tower of the Abbey still points upwards to the sky, although bells and roof are gone, while half-a-mile away the parish church that was there before it—having been rebuilt indeed upon Saxon foundations in the days of William Rufus—yet lies among its ancient elms....