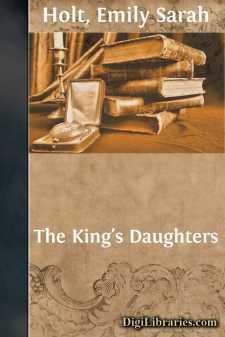 “Give you good den, Master Clere!” said a rosy-faced countrywoman with a basket on her arm, as she came into one of the largest clothier’s shops in Colchester. It was an odd way of saying “Good Evening,” but this was the way in which they said it in 1556. The rosy-faced woman set down her basket on the counter, and looked round the shop in the leisurely way of somebody who was in no particular hurry. They did not dash and rush and scurry through their lives in those days, as we do in these. She was looking to see if any acquaintance of hers was there. As she found nobody she went to business. “Could you let a body see a piece of kersey, think you? I’d fain have a brown or a good dark murrey ’d serve me—somewhat that should not show dirt, and may be trusted to wear well.—Good den, Mistress Clere!—Have you e’er a piece o’ kersey like that?”

Master Nicholas Clere, who stood behind the counter, did not move a finger. He was a tall, big man, and he rested both hands on his counter, and looked his customer in the face. He was not a man whom people liked much, for he was rather queer-tempered, and as Mistress Clere was wont to remark, “a bit easier put out than in.” A man of few words, but those were often pungent, was Nicholas Clere.

“Well! you mustn’t ask me five shillings a yard,” said the rosy-faced woman, with a little laugh. That was the price of the very best and finest kersey.

“Come, you know the sort as ’ill serve me. Shilling a yard at best. If you’ve any at eightpence—”

“Well, then I reckon I must go a bit higher.”

“We’ve as good a kersey at elevenpence,” broke in Mrs Clere, “as you’d wish to see, Alice Mount, of a summer day. A good brown, belike, and not one as ’ll fade—and a fine thread—for the price, you know. You don’t look for kersey at elevenpence to be even with that at half-a-crown, now, do you? but you’ll never repent buying this, I promise you.”

Mrs Clere was not by any means a woman of few words. While she was talking her husband had taken down the kersey, and opened it out upon the counter.

There were two other women in the shop, to whom Mrs Clere was showing some coarse black stockings: they looked like mother and daughter. While Alice Mount was looking at the kersey, the younger of these two said to the other—

“Isn’t that Alice Mount of Bentley?—she that was had to London last August by the Sheriffs for heresy, with a main lot more?”

“Ay, ’tis she,” answered the mother in an undertone.

“Twenty-three of them, weren’t there?”

“Thereabouts. They stood to it awhile, if you mind, and then they made some fashion of submission, and got let off.”

“So they did, but I mind Master Maynard said it was but a sorry sort. He wouldn’t have taken it, quoth he.”

The other woman laughed slightly....