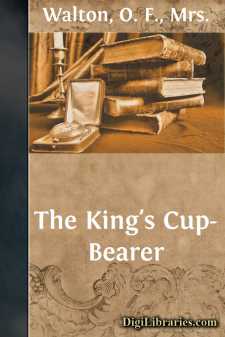 The City of Lilies.

The great Rab-shakeh, magnificently attired in all the brilliancy of Oriental costume, is walking towards the city gate. Above him stretches the deep blue sky of the East, about and around him stream the warm rays of the sun. It is the month of December, yet no cold biting wind meets him, and he needs no warm wraps to shield him from the frost or snow.

The city through which the Rab-shakeh walks is very beautiful; it is the capital of the kingdom of Persia. Its name is Shushan, the City of Lilies, and it is so called from the fields of sweet-scented iris flowers which surround it. It is built on a sunny plain, through which flow two rivers,—the Choaspes and the Ulai; he sees them both sparkling in the sunshine, as they wind through the green plain, sometimes flowing quite close to each other, at one time so near that only two and a half miles lie between them, then wandering farther away only to return again, as if drawn together by some subtle attraction.

Then, in the distance, beyond the plain and beyond the rivers, the great Rab-shakeh sees mountains, for a high mountain range, about twenty-five miles from the city, bounds the eastern horizon. He has good reason to love those high mountains, which rise many thousands of feet above the plain, for even in the hottest weather, when the heat in Shushan would otherwise be unbearable, he can always enjoy the cooling breezes which come from the everlasting snow-fields on the top of that mountain range, and which blow refreshingly over the sultry plain beneath.

The City of Lilies is a very ancient place. It was probably built long before the time of Abraham. We read in Gen. xiv. of a certain Chedorlaomer, King of Elam, who gathered together a number of neighbouring kings, and by means of their assistance invaded Palestine, and took Lot prisoner. This Chedorlaomer probably lived by these very rivers, the Choaspes and the Ulai, and Shushan was the capital city of the old kingdom of Elam over which he ruled.

Later on the City of Lilies was taken by the Babylonians. They had their own capital city, the mighty Babylon, on the Euphrates. But although it was not the capital, still Shushan was a very important place in that first great world-empire. We find Daniel, the prime minister, staying in the palace of Shushan, to which he had been sent to transact business for the King of Babylon, and it was during his visit to the City of Lilies that God sent him one of his most famous visions. In his dream he thought he was standing by the river Ulai, the very river he could see from the palace window, and before that river stood the ram with the two horns and the strong he-goat, by means of which God drew out before his eyes a picture of the future history of the world.

But the great Babylonian empire did not last long. Cyrus the Persian took Babylon, Belshazzar was slain, the great Assyrian power passed away, and the second great world-empire, the Persian empire, was built upon its ruins.

What city did the Persian kings make their capital?...