The King's Arrow A Tale of the United Empire Loyalists 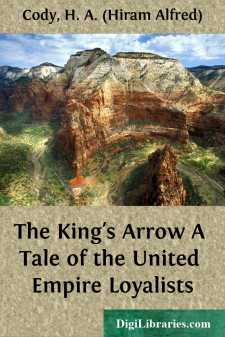 CHAPTER I WHEN THE CANNON ROARED

A keen wind whipping in from the west swayed the tops of innumerable pines, firs, spruces, and maples. They were goodly trees, unharmed as yet by scathing fire or biting axe. Proudly they lifted their crests to the wind and the sun, while down below, their great boles were wrapped in perpetual shade and calm. Life, mysterious life, lurked within those brooding depths, and well did the friendly trees keep the many secrets of the denizens of the wild.

Through that trackless maze two wayfarers warily threaded their course on a chill May day in the year seventeen hundred and eighty-three. They were men, and their speed denoted the urgency of the business upon which they were bent. They were clad in buckskin jackets, and homespun trousers, which showed signs of hard usage. Moccasins encased their feet, and squirrel-skin caps sat lightly upon their heads. Each carried a heavy flint-lock musket in his hand, while at his side swung the inevitable powder-horn, hung low enough so as not to interfere with the small pack strapped across the shoulders.

Both travellers were peering intently forward, and when at length the glint of shimmering water glimmered through the trees their faces brightened with satisfaction. But just then the leader stopped dead in his tracks, and glanced anxiously to the left. He was an Indian of magnificent physique, and princely bearing, as straight as the trees around him. His companion, too, was standing in a listening attitude a few feet away. His keen ears had also caught a sound, and he knew its meaning. He was a white man, much younger than the Indian, although from his deeply-bronzed face he might have been mistaken for a native. He measured up nobly to the other in size and bearing, as well as in strength, woodland skill, and endurance on the trail.

"Slashers, Pete, eh?" he questioned in a low voice.

Without another word he swung sharply to the right, and led the way to the water in a wide circle. Cautiously they approached the shore, and then keeping within the edge of the forest they moved slowly along, most of the time upon their hands and knees. Occasionally they paused to listen, but the only sounds they heard were the ones which had first arrested their attention, although much nearer now.

Presently they stopped and from a thicket of bushes drew forth a birch canoe, which had been cunningly hidden. It took them but a few minutes to carry it to the water, step lightly aboard, and push away from the shore. Each seized a paddle, and soon the canoe was headed for the open, with Dane squatting forward, and the Indian seated astern.

Less hardy souls would have hesitated ere venturing out upon that angry stretch of water in such a frail craft. The crooked Kennebacasis was showing its temper in no uncertain manner. Exposed to the full rake of the strong westerly wind, the waves were running high, and breaking into white-caps, threatened to engulf the reeling canoe....