The Kingdom of Heaven; What is it? 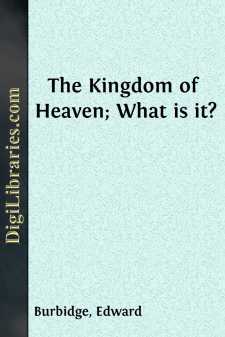 THE KING’S HERALD. “On Jordan’s banks the Baptist’s cryAnnounces that the Lord is nigh;Awake and hearken, for he bringsGlad tidings of the King....”

When the Saviour of the world was about to enter upon His public ministry, the Jewish nation was startled with the cry, “The Kingdom of Heaven is at hand” (S. Matt. iii. 2).

Such was God’s call to His people of old time, to prepare themselves to take part in the fulfilment of the promises, on which their faith and hopes were founded. The fulness of the times had come; and Christ, the long-promised and long-expected Saviour and King, was nigh at hand.

And ever since that day, as the good news of the Kingdom has spread from land to land, it has been the portion of the Lord’s people to endeavour to realise their high position in that Kingdom, and to discharge their duties loyally to their Heavenly King.

But the words—“The Kingdom of Heaven”—are apt to lead away the thoughts from the present to the future, from this world to a better one. And since men are not in Heaven now, but are surrounded with earthly cares and troubles, there is danger lest they should forget or be ignorant of the intimate connection which these words have with their daily life as Christians, and with its duties, privileges, and blessings.

And yet the practical importance of this subject to Christian men and women will be seen clearly after a moment’s consideration. For any one, who is at all acquainted with the words of Holy Scripture, will recall to mind at once the frequent reference to “The Kingdom of Heaven” in the Gospels. And though it will probably seem a somewhat startling assertion to most persons, yet it is nevertheless a true one, that from the day when our Lord began His public ministry, until He ascended into Heaven, His teaching was almost wholly occupied with this one subject—“The Kingdom of Heaven.” And it is the purpose of the following pages to bring together the various statements about it, in such a way as to lead to a clear understanding of “The Kingdom of Heaven”—what it is—and of our position in this Kingdom, with its present blessings, privileges and duties, and its future glories.

“The Kingdom of Heaven”—What is it?

There are three things which are necessarily included in the idea of a Kingdom—a King to rule over it; subjects to be ruled; and a place where they dwell. And since it is necessary, if we would enquire into the nature of “The Kingdom of Heaven,” first of all to understand clearly who is the King, and who and where are His subjects, let us begin with taking a general view of these chief points; and then afterwards enter more fully into the consideration of the various passages of Holy Scripture which describe the details of the Kingdom.

The Jews expected the Messiah as their King. And when the Wise Men came from the East, and asked “Where is He that is born King of the Jews” (S. Matt. ii. 2), we read that King Herod referred their enquiry to those who were learned in the Scriptures, in this form, “He demanded of them where Christ”—i.e....