The King of Ireland's Son 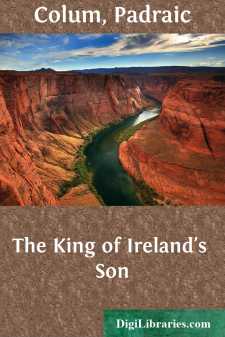 Connal was the name of the King who ruled over Ireland at that time. He had three sons, and, as the fir-trees grow, some crooked and some straight, one of them grew up so wild that in the end the King and the King's Councillor had to let him have his own way in everything. This youth was the King's eldest son and his mother had died before she could be a guide to him.

Now after the King and the King's Councillor left him to his own way the youth I'm telling you about did nothing but ride and hunt all day. Well, one morning he rode abroad—

His hound at his heel,His hawk on his wrist;A brave steed to carry him whither he list,And the blue sky over him,

and he rode on until he came to a turn in the road. There he saw a gray old man seated on a heap of stones playing a game of cards with himself. First he had one hand winning and then he had the other. Now he would say "That's my good right," and then he would say "Play and beat that, my gallant left." The King of Ireland's Son sat on his horse to watch the strange old man, and as he watched him he sang a song to himself

"Prince," said the old fellow looking up at him, "if you can play a game as well as you can sing a song, I'd like if you would sit down beside me."

"I can play any game," said the King of Ireland's Son. He fastened his horse to the branch of a tree and sat down on the heap of stones beside the old man.

"What shall we play for?" said the gray old fellow.

"Whatever you like," said the King of Ireland's Son.

"If I win you must give me anything I ask, and if you win I shall give you anything you ask. Will you agree to that?"

They played, and the King of Ireland's Son won the game. "Now what do you desire me to give, King's Son?" said the gray old fellow.

"I shan't ask you for anything," said the King of Ireland's Son, "for I think you haven't much to give."

"Never mind that," said the gray old fellow. "I mustn't break my promise, and so you must ask me for something."

"Very well," said the King's Son. "Then there's a field at the back of my father's Castle and I want to see it filled with cattle to-morrow morning. Can you do that for me?"

"I can," said the gray old fellow.

"Then I want fifty cows, each one white with a red ear, and a white calf going beside each cow."

"The cattle shall be as you wish."

"Well, when that's done I shall think the wager has been paid," said the King of Ireland's son. He mounted his horse, smiling at the foolish old man who played cards with himself and who thought he could bring together fifty white kine, each with a red ear, and a white calf by the side of each cow. He rode away

His hound at his heel,His hawk on his wrist;A brave steed to carry him whither he list,And the green ground under him,

and he thought no more of the gray old fellow.

But in the morning, when he was taking his horse out of the stable, he heard the grooms talking about a strange happening....