The Kellys and the O'Kellys 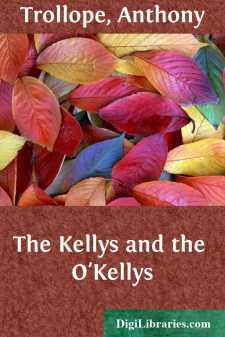 In vain, after that, did Anty try to sleep; turn which way she would, she saw the bloodshot eyes and horrid drunken face of her cruel brother. For a long time she lay, trembling and anxious; fearing she knew not what, and trying to compose herself—trying to make herself think that she had no present cause for fear; but in vain. If she heard a noise, she thought it was her brother's footstep, and when the house was perfectly silent and still, she feared the very silence itself. At last, she crept out of bed, and, taking the candle left by her brother, which had now burned down to the socket, stepped softly down the stairs, to the place where the two maid-servants slept, and, having awakened them, she made Biddy return with her and keep her company for the remainder of the night. She did not quite tell the good-natured girl all that had passed; she did not own that her brother had threatened to send her to a madhouse, or that he had sworn to have her life; but she said enough to show that he had shamefully ill-treated her, and to convince Biddy that wherever her mistress might find a home, it would be very unadvisable that she and Barry should continue to live under the same roof.

Early in the morning, "Long afore the break o' day," as the song says, Biddy got up from her hard bed on the floor of her mistress' room, and, seeing that Anty was at last asleep, started to carry into immediate execution the counsels she had given during the night. As she passed the head of the stairs, she heard the loud snore of Barry, in his drunken slumber; and, wishing that he might sleep as sound for ever and ever, she crept down to her own domicile, and awakened her comrade.

"And what'd you be doing out now?" yawned Judy.

"An arrand of the misthress;—shure, he used her disperate. Faix, it's a wondher he didn't murther her outright!"

"And where are ye going now?"

"Jist down to Dunmore—to the Kellys then, avich. Asy now; I'll be telling you all bye and bye. She must be out of this intirely."

"Is't Miss Anty? Where'd she be going thin out of this?"

"Divil a matther where! He'd murther her, the ruffian 'av he cotched her another night in his dhrunkenness. We must git her out before he sleeps hisself right. But hurry now, I'll be telling you all when I'm back again."

The two crept off to the back door together, and, Judy having opened it, Biddy sallied out, on her important and good-natured mission. It was still dark, though the morning was beginning to break, as she stood, panting, at the front door of the inn. She tried to get in at the back, but the yard gates were fastened; and Jack, the ostler, did not seem to be about yet. So she gave a timid, modest knock, with the iron knocker, on the front door. A pause, and then a second knock, a little louder; another pause, and then a third; and then, as no one came, she remembered the importance of her message, and gave such a rap as a man might do, who badly wanted a glass of hot drink after travelling the whole night.

The servants had good or hardy consciences, for they slept soundly; but the widow Kelly, in her little bed-room behind the shop, well knew the sound of that knocker, and, hurrying on her slippers and her gown, she got to the door, and asked who was there.

"What ails her;—and why d'you come here? Why don't you go to Doctor Colligan, av' she's ill; and not come knocking here?"

It would, I am sure, be doing injustice to Mrs Kelly to say that her curiosity was stronger than her charity; they both, however, no doubt had their effect, and the door was speedily opened.

"Come out of the cowld, girl, in to the kitchen fire," said the widow, who didn't like the February blast, to which Biddy, in her anxiety, had been quite indifferent; and the careful widow again bolted the door, and followed the woman into certainly the warmest place in Dunmore, for the turf fire in the inn kitchen was burning day and night....