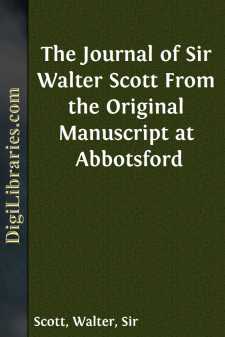 [Edinburgh,] November 20, 1825.—I have all my life regretted that I did not keep a regular Journal. I have myself lost recollection of much that was interesting, and I have deprived my family and the public of some curious information, by not carrying this resolution into effect. I have bethought me, on seeing lately some volumes of Byron's notes, that he probably had hit upon the right way of keeping such a memorandum-book, by throwing aside all pretence to regularity and order, and marking down events just as they occurred to recollection. I will try this plan; and behold I have a handsome locked volume, such as might serve for a lady's album. Nota bene, John Lockhart, and Anne, and I are to raise a Society for the suppression of Albums. It is a most troublesome shape of mendicity. Sir, your autograph—a line of poetry—or a prose sentence!—Among all the sprawling sonnets, and blotted trumpery that dishonours these miscellanies, a man must have a good stomach that can swallow this botheration as a compliment.

I was in Ireland last summer, and had a most delightful tour. It cost me upwards of £500, including £100 left with Walter and Jane, for we travelled a large party and in style. There is much less exaggerated about the Irish than is to be expected. Their poverty is not exaggerated; it is on the extreme verge of human misery; their cottages would scarce serve for pig-styes, even in Scotland, and their rags seem the very refuse of a rag-shop, and are disposed on their bodies with such ingenious variety of wretchedness that you would think nothing but some sort of perverted taste could have assembled so many shreds together. You are constantly fearful that some knot or loop will give, and place the individual before you in all the primitive simplicity of Paradise. Then for their food, they have only potatoes, and too few of them. Yet the men look stout and healthy, the women buxom and well-coloured.

Dined with us, being Sunday, Will. Clerk and Charles Kirkpatrick Sharpe. W.C. is the second son of the celebrated author of Naval Tactics. I have known him intimately since our college days; and, to my thinking, never met a man of greater powers, or more complete information on all desirable subjects. In youth he had strongly the Edinburgh pruritus disputandi; but habits of society have greatly mellowed it, and though still anxious to gain your suffrage to his views, he endeavours rather to conciliate your opinion than conquer it by force. Still there is enough of tenacity of sentiment to prevent, in London society, where all must go slack and easy, W.C. from rising to the very top of the tree as a conversation man, who must not only wind the thread of his argument gracefully, but also know when to let go. But I like the Scotch taste better; there is more matter, more information, above all, more spirit in it. Clerk will, I am afraid, leave the world little more than the report of his fame. He is too indolent to finish any considerable work. Charles Kirkpatrick Sharpe is another very remarkable man....