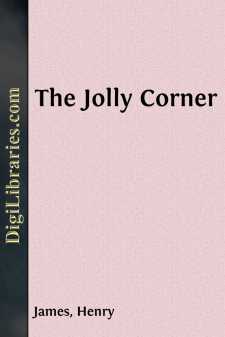 “Every one asks me what I ‘think’ of everything,” said Spencer Brydon; “and I make answer as I can—begging or dodging the question, putting them off with any nonsense.  It wouldn’t matter to any of them really,” he went on, “for, even were it possible to meet in that stand-and-deliver way so silly a demand on so big a subject, my ‘thoughts’ would still be almost altogether about something that concerns only myself.”  He was talking to Miss Staverton, with whom for a couple of months now he had availed himself of every possible occasion to talk; this disposition and this resource, this comfort and support, as the situation in fact presented itself, having promptly enough taken the first place in the considerable array of rather unattenuated surprises attending his so strangely belated return to America.  Everything was somehow a surprise; and that might be natural when one had so long and so consistently neglected everything, taken pains to give surprises so much margin for play.  He had given them more than thirty years—thirty-three, to be exact; and they now seemed to him to have organised their performance quite on the scale of that licence.  He had been twenty-three on leaving New York—he was fifty-six to-day; unless indeed he were to reckon as he had sometimes, since his repatriation, found himself feeling; in which case he would have lived longer than is often allotted to man.  It would have taken a century, he repeatedly said to himself, and said also to Alice Staverton, it would have taken a longer absence and a more averted mind than those even of which he had been guilty, to pile up the differences, the newnesses, the queernesses, above all the bignesses, for the better or the worse, that at present assaulted his vision wherever he looked.

The great fact all the while, however, had been the incalculability; since he had supposed himself, from decade to decade, to be allowing, and in the most liberal and intelligent manner, for brilliancy of change.  He actually saw that he had allowed for nothing; he missed what he would have been sure of finding, he found what he would never have imagined.  Proportions and values were upside-down; the ugly things he had expected, the ugly things of his far-away youth, when he had too promptly waked up to a sense of the ugly—these uncanny phenomena placed him rather, as it happened, under the charm; whereas the “swagger” things, the modern, the monstrous, the famous things, those he had more particularly, like thousands of ingenuous enquirers every year, come over to see, were exactly his sources of dismay.  They were as so many set traps for displeasure, above all for reaction, of which his restless tread was constantly pressing the spring.  It was interesting, doubtless, the whole show, but it would have been too disconcerting hadn’t a certain finer truth saved the situation.  He had distinctly not, in this steadier light, come over all for the monstrosities; he had come, not only in the last analysis but quite on the face of the act, under an impulse with which they had nothing to do.  He had come—putting the thing pompously—to look at his “property,” which he had thus for a third of a century not been within four thousand miles of; or, expressing it less sordidly, he had yielded to the humour of seeing again his house on the jolly corner, as he usually, and quite fondly, described it—the one in which he had first seen the light, in which various members of his family had lived and had died, in which the holidays of his overschooled boyhood had been passed and the few social flowers of his chilled adolescence gathered, and which, alienated then for so long a period, had, through the successive deaths of his two brothers and the termination of old arrangements, come wholly into his hands.  He was the owner of another, not quite so “good”—the jolly corner having been, from far back, superlatively extended and consecrated; and the value of the pair represented his main capital, with an income consisting, in these later years, of their respective rents which (thanks precisely to their original excellent type) had never been depressingly low.  He could live in “Europe,” as he had been in the habit of living, on the product of these flourishing New York leases, and all the better since, that of the second structure, the mere number in its long row, having within a twelvemonth fallen in, renovation at a high advance had proved beautifully possible....