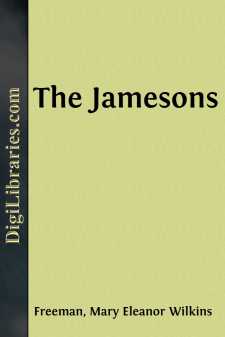 Until that summer nobody in our village had ever taken boarders. There had been no real necessity for it, and we had always been rather proud of the fact. While we were certainly not rich—there was not one positively rich family among us—we were comfortably provided with all the necessities of life. We did not need to open our houses, and our closets, and our bureau drawers, and give the freedom of our domestic hearths, and, as it were, our household gods for playthings, to strangers and their children.

Many of us had to work for our daily bread, but, we were thankful to say, not in that way. We prided ourselves because there was no summer hotel with a demoralizing bowling-alley, and one of those dangerous chutes, in our village. We felt forbiddingly calm and superior when now and then some strange city people from Grover, the large summer resort six miles from us, travelled up and down our main street seeking board in vain. We plumed ourselves upon our reputation of not taking boarders for love or money.

On the afternoon of the first day of June, six years ago, I was sewing at my sitting-room window. I was making a white muslin dress for little Alice, my niece, to wear to the Seventeenth-of-June picnic. I had been sitting there alone all the afternoon, and it was almost four o'clock when I saw Amelia Powers, who lives opposite, and who had been sewing at her window—I had noticed her arm moving back and forth, disturbing the shadows of the horse-chestnut tree in the yard—fling open her front door, run out on the piazza, and stand peering around the corner post, with her neck so stretched that it looked twice as long as before. Then her sister Candace, who has poor health and seldom ventures out-of-doors, threw up the front chamber window and leaned out as far as she was able, and stared with her hand shading her eyes from the sun. I could just see her head through an opening in the horse-chestnut branches.

Then I heard another door open, and Mrs. Peter Jones, who lives in the house next below the Powers', came running out. She ran down the walk to her front gate and leaned over, all twisted sideways, to see.

Then I heard voices, and there were Adeline Ketchum and her mother coming down the street, all in a flutter of hurry. Adeline is slender and nervous; her elbows jerked out, her chin jerked up, and her skirts switched her thin ankles; Mrs. Ketchum is very stout, and she walked with a kind of quivering flounce. Her face was blazing, and I knew her bonnet was on hindside before—I was sure that the sprig of purple flowers belonged on the front.

When Adeline and her mother reached Mrs. Peter Jones' gate they stopped, and they all stood there together looking....