The Isle of Unrest 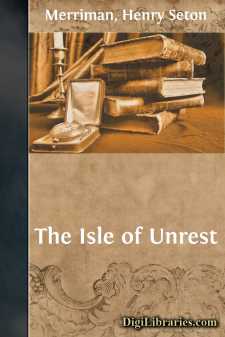 CHAPTER I. THE MOVING FINGER.

"The Moving Finger writes; and, having writ,Moves on: nor all thy piety nor witShall lure it back to cancel half a line,Nor all thy tears wash out a word of it."

The afternoon sun was lowering towards a heavy bank of clouds hanging still and sullen over the Mediterranean. A mistral was blowing. The last yellow rays shone fiercely upon the towering coast of Corsica, and the windows of the village of Olmeta glittered like gold.

There are two Olmetas in Corsica, both in the north, both on the west coast, both perched high like an eagle's nest, both looking down upon those lashed waters of the Mediterranean, which are not the waters that poets sing of, for they are as often white as they are blue; they are seldom glassy except in the height of summer and sailors tell that they are as treacherous as any waters of the earth. Neither aneroid nor weather-wisdom may, as a matter of fact, tell when a mistral will arise, how it will blow, how veer, how drop and rise, and drop again. For it will blow one day beneath a cloudless sky, lashing the whole sea white like milk, and blow harder to-morrow under racing clouds.

The great chestnut trees in and around Olmeta groaned and strained in the grip of their lifelong foe. The small door, the tiny windows, of every house were rigorously closed. The whole place had a wind-swept air despite the heavy foliage. Even the roads, and notably the broad "Place," had been swept clean and dustless. And in the middle of the "Place," between the fountain and the church steps, a man lay dead upon his face.

It is as well to state here, once for all, that we are dealing with Olmeta-di-Tuda, and not that other Olmeta—the virtuous, di Capocorso, in fact, which would shudder at the thought of a dead man lying on its "Place," before the windows of the very Mairie, under the shadow of the church. For Cap Corse is the good boy of Corsica, where men think sorrowfully of the wilder communes to the south, and raise their eyebrows at the very mention of Corte and Sartene—where, at all events, the women have for husbands, men—and not degenerate Pisan vine-snippers.

It was not so long ago either. For the man might have been alive to-day, though he would have been old and bent no doubt; for he was a thick-set man, and must have been strong. He had, indeed, carried his lead up from the road that runs by the Guadelle river. Was he not to be traced all the way up the short cut through the olive terraces by one bloody footprint at regular intervals? You could track his passage across the "Place," towards the fountain of which he had fallen short like a poisoned rat that tries to reach water and fails.

He lay quite alone, still grasping the gun which he had never laid aside since boyhood. No one went to him; no one had attempted to help him. He lay as he had fallen, with a thin stream of blood running slowly from one trouser-leg. For this was Corsican work—that is to say, dirty work—from behind a rock, in the back, at close range, without warning or mercy, as honest men would be ashamed to shoot the merest beast of the forest....