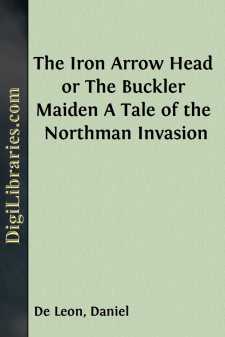 The house of Master Eidiol, the dean of the Skippers' or Mariners' Guild of Paris, was situated not far from the port of St. Landry and of the ramparts of that part of the town that is known as the Cite, which is bathed by the two branches of the Seine, and is flanked with towers at the entrance of the large and the small bridge, its only means of access from the suburban portions of the larger Paris. No one could cross the bridge without paying toll to the bishop, the ecclesiastical feudal lord of the Cite. Like all other houses of the common people, Master Eidiol's was constructed of wooden slats held together by means of cross-beams; it was only two storeys high, and was roofed with thatch. Only the basilicas, the rich abbeys of St. Germain-des-Pres, of St. Germain-d'Auxerre and others, as also the residences of the counts, the viscounts and the bishops of Paris were built of stone and covered with lead, not infrequently with gilded roofings. In the upper storey of Master Eidiol's house, Martha, his wife, was engaged on some needlework, seated near her daughter Anne the Sweet, who was busy spinning. Agreeable to a new-fangled style of the time which, started by the royal families and their grandees, descended to the common towns-people, Eidiol had given a surname to his children. He called his daughter Anne, "the Sweet," for there was nothing in the world milder or sweeter than this child, whose nature was as angelic as her face. His son Guyrion, Eidiol surnamed "the Plunger", because the daring lad, a skipper like his father, was one of the most skilful divers that ever cut across the swift waters of the Seine. Anne the Sweet spun her hemp at the side of her mother, a good old woman of more than sixty years, delicate in appearance, clad in black, and wearing a number of relics around her neck. Pointing to the cheerful rays of the May sun that entered through the little lead-bordered glass squares of the narrow window of her chamber, Martha observed to her daughter:

"What a beautiful spring day. We may perhaps see to-day Father Fultrade, the worthy leader of the choir at St. Denis, out taking a ride on his fine horse."

"By this beautiful May day, I would prefer to go on foot! Do you remember, mother, how Rustic the Gay wagered with my brother a tame quail that he would walk two leagues in an hour? And how he won the wager, and gave me the quail?"

"How foolish you are! Do you imagine that so distinguished a personage as the leader of the choir at St. Denis could afford to walk two leagues and more, like other common people?"

"But Father Fultrade is still young enough, big enough, and robust enough to walk any such distance. Rustic the Gay would do it in a little more than half an hour."

"Rustic is not Father Fultrade! What a holy man! It is from him I have all these sacred relics that I wear. He gave them to me when he lived in this town as the priest of the Church of Notre Dame, and great favorite with Seigneur Rothbert, the Count of the City of Paris. Alas! Without these sacred relics I would certainly have died of that violent cough, which has not yet quite left me."

"Poor mother, that cough does not cease to cause uneasiness to my father, my brother and myself. And yet you might now be wholly healed of it if you would only consent to try the remedy that has been so highly recommended to us."

"The one that the skippers of the port use. They put some tar in a bowl of water, boil it, and drink it down warm. Rustic the Gay has told us of the wonderful cures that he knows the potions to have effected."

"You are always talking about Rustic the Gay."

"I?" ingenuously answered the young girl, turning her candid face toward her mother and without betraying the slightest embarrassment. "If I frequently talk to you about him it is unintentional."

"I believe you, my child. But how can you expect that any human medicine could cure me completely, when my distemper resists the relics? You might as well try to make me believe that any human power could return to me the dear little girl, who, alas! disappeared from our side ten years before the birth of your brother. Let us bow before the will of God!"

"Poor little sister! I weep over her absence, although I have never known her."

"My poor little daughter could have taken my place near you. She would now be old enough to be your mother."

A loud noise, interspersed with cries and proceeding from the street, interrupted at this point the conversation between Martha and her daughter....