The Inventions of the Idiot 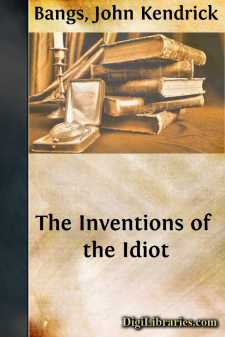 It was before the Idiot's marriage, and in the days when he was nothing more than a plain boarder in Mrs. Smithers-Pedagog's High-class Home for Single Gentlemen, that he put what the School-master termed his "alleged mind" on plans for the amelioration of the condition of the civilized.

"The trials of the barbarian are really nothing as compared with the tribulations of civilized man," he said, as the waitress passed him a piece of steak that had been burned to a crisp. "In the Cannibal Islands a cook who would send a piece of broiled missionary to her employer's table in this condition would herself be roasted before another day had dawned. We, however, must grin and bear it, because our esteemed landlady cannot find anywhere in this town a woman better suited for the labors of the kitchen than the blank she has had the misfortune to draw in the culinary lottery, familiarly known to us, her victims, as Bridget."

"This is an exceptional case," said Mr. Pedagog. "We haven't had a steak like this before in several weeks."

"True," returned the Idiot. "This is a sirloin, I believe. The last steak we had was a rump steak, and it was not burned to a crisp, I admit. It was only boiled, if I remember rightly, by mistake; Bridget having lost her fifth consecutive cousin in ten days the night before, and being in consequence so prostrated that she could not tell a gridiron from a lawn-mower."

"Well, you know the popular superstition, Mr. Idiot," said the Poet. "The devil sends the cooks."

"I don't believe it," retorted the Idiot. "That's one of those proverbs that haven't a particle of truth in 'em—nor a foundation in reason either, like 'Never look a gift horse in the mouth.' Of all absurd advice ever given to man by a thoughtless thinker, that, I think, bears the palm. I know a man who didn't look a gift horse in the mouth, and the consequence was that he accepted a horse that was twenty-eight years old. The beast died in his stables three days later, and the beneficiary had to pay five dollars to have him carted away. As for the devil sending the cooks, I haven't any faith in the theory. Any person who had come from the devil would know how to manage a fire better than ninety-nine per cent. of the cooks ever born. It would be a good thing if every one of 'em were forced to serve an apprenticeship with the Prince of Darkness. However, steak like this serves a good purpose. It serves to bind our little circle more firmly together. There's nothing like mutual suffering to increase the sympathy that should exist between men situated as we are; and as for Mrs. Smithers-Pedagog, I wish her to understand distinctly that I am criticising the cook and not herself. If this particular dainty had been prepared by her own fair hand, I doubt not I should want more of it."

"I thank you," returned the landlady, somewhat mollified by this remark. "If I had more time I should occasionally do the cooking myself, but, as it is, I am overwhelmed with work."

"I can bear witness to that," observed Mr. Whitechoker. "Mrs. Smithers-Pedagog is one of the most useful ladies in my congregation. If it were not for her, many a heathen would be going without garments to-day."

"Well, I don't like to criticise," said the Idiot, "but I think the heathen at home should be considered before the heathen abroad....