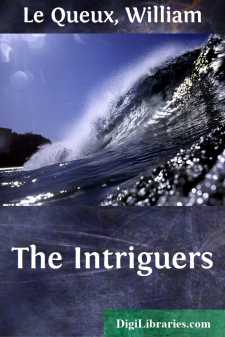 The scene was Dean Street, Soho, and this story opens on a snowy winter night in the January of 1888. The modern improvements of Shaftesbury Avenue were as yet unmade, and the foreign district of London had still to be opened up.

A cold north wind was blowing on the few pedestrians whom necessity, or some urgent obligation, had compelled to tramp the pavements laden with snow. A few cabs and carriages crawled along the difficult roadway to the Royalty Theatre, deposited their occupants and crawled back again.

Nello Corsini, a slim, handsome young Italian, poorly clad, carrying a violin-case in one hand, wandered down the narrow street, leading with his other a slender girl of about eighteen, his sister, Anita. She was dressed as shabbily as he was.

The snow was lying thickly on the streets and roads, but it had ceased to fall a couple of hours ago. The two itinerant musicians had crept out at once, as soon as the weather showed signs of mending, from their poor lodging.

They had only a few pence left. The bitter weather of the last few days had affected their miserable trade very adversely. It was necessary they should take advantage of to-night, for the purpose of scratching together something for the evening meal.

There were lights in several windows. It was, of course, far from being a wealthy quarter; but there could be none behind those warm-looking lights, safely sheltered from the cold and wind, so wretched as these two poor children of fortune who would have to go supperless to bed if they could not charm a few pence out of the passers-by.

Nello withdrew his violin from its case with his cold fingers. Just as he was about to draw the bow across the strings, a carriage passed down the street on its way to the Royalty Theatre. Inside was a handsome man verging upon thirty-five. Beside him sat a very beautiful girl. Nello glanced at them swiftly as they came by. They were evidently not English, but he could not for the moment guess at their nationality.

They certainly did not belong to any one of the Latin races, that was evident. It was not till later that he discovered their identity. The tall, imperious-looking man was Prince Zouroff, the Russian Ambassador to the Court of St. James’s. The girl, about twenty, was his young sister, the Princess Nada.

The young Princess was as kind and sweet-natured as she was beautiful. She caught sight of the two mendicants, for as such she regarded them, standing there in the snow, and a gleam of compassion came into her lovely eyes. Impetuously, she pulled at the check-string, with the intention of stopping the carriage and giving them money.

Her brother laid his hand on hers roughly.

“What foolish thing were you going to do now, Nada? Your sentimentality is an absolute curse to you. If you had your own way, you would give to every whining beggar in the street.”

She shrank back as if he had struck her a blow. There was no love lost between the two. He despised her for her kind, charitable instincts; she disliked him for his hard, domineering nature, unsoftened by any lovable or generous qualities. She put back the purse which she had drawn hastily from her pocket. Her mouth curled in a mutinous and contemptuous smile, but she returned no answer to the brutal words.

Nello played on in the cold and biting wind. When he had finished, his sister had been the recipient of two small donations from the few passers-by. The girl’s heart already felt lighter. They could not expect very much on such an unpropitious night as this.

And then, as the young violinist paused, from the first floor of one of the houses close to them, there floated faintly into the air the strains of a sweet and melancholy air, played with exquisite taste and feeling.

Nello listened eagerly, while his heart contracted with a spasm of pain. The man who had played that beautiful little melancholy romance was as capable a violinist as himself. Alas, how different their lots!

When the sounds had died away, the young man resumed his instrument. He played over twice that beautiful theme which had impressed him so strongly, and then, as if inspired, wove into it a series of brilliant variations.

He felt he was playing as he had only played once or twice before in his life....