The Intelligence Office (From "Mosses from an Old Manse") 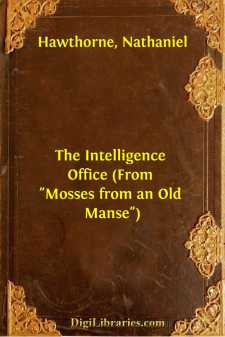 Grave figure, with a pair of mysterious spectacles on his nose and a pen behind his ear, was seated at a desk in the corner of a metropolitan office. The apartment was fitted up with a counter, and furnished with an oaken cabinet and a Chair or two, in simple and business-like style. Around the walls were stuck advertisements of articles lost, or articles wanted, or articles to be disposed of; in one or another of which classes were comprehended nearly all the Conveniences, or otherwise, that the imagination of man has contrived. The interior of the room was thrown into shadow, partly by the tall edifices that rose on the opposite side of the street, and partly by the immense show-bills of blue and crimson paper that were expanded over each of the three windows. Undisturbed by the tramp of feet, the rattle of wheels, the hump of voices, the shout of the city crier, the scream of the newsboys, and other tokens of the multitudinous life that surged along in front of the office, the figure at the desk pored diligently over a folio volume, of ledger-like size and aspect, He looked like the spirit of a record—the soul of his own great volume made visible in mortal shape.

But scarcely an instant elapsed without the appearance at the door of some individual from the busy population whose vicinity was manifested by so much buzz, and clatter, and outcry. Now, it was a thriving mechanic in quest of a tenement that should come within his moderate means of rent; now, a ruddy Irish girl from the banks of Killarney, wandering from kitchen to kitchen of our land, while her heart still hung in the peat-smoke of her native cottage; now, a single gentleman looking out for economical board; and now—for this establishment offered an epitome of worldly pursuits—it was a faded beauty inquiring for her lost bloom; or Peter Schlemihl, for his lost shadow; or an author of ten years' standing, for his vanished reputation; or a moody man, for yesterday's sunshine.

At the next lifting of the latch there entered a person with his hat awry upon his head, his clothes perversely ill-suited to his form, his eyes staring in directions opposite to their intelligence, and a certain odd unsuitableness pervading his whole figure. Wherever he might chance to be, whether in palace or cottage, church or market, on land or sea, or even at his own fireside, he must have worn the characteristic expression of a man out of his right place.

"This," inquired he, putting his question in the form of an assertion,—"this is the Central Intelligence Office?"

"Even so," answered the figure at the desk, turning another leaf of his volume; he then looked the applicant in the face and said briefly, "Your business?"

"I want," said the latter, with tremulous earnestness, "a place!"

"A place! and of what nature?" asked the Intelligencer. "There are many vacant, or soon to be so, some of which will probably suit, since they range from that of a footman up to a seat at the council-board, or in the cabinet, or a throne, or a presidential chair."

The stranger stood pondering before the desk with an unquiet, dissatisfied air,—a dull, vague pain of heart, expressed by a slight contortion of the brow,—an earnestness of glance, that asked and expected, yet continually wavered, as if distrusting. In short, he evidently wanted, not in a physical or intellectual sense, but with an urgent moral necessity that is the hardest of all things to satisfy, since it knows not its own object.

"Ah, you mistake me!" said he at length, with a gesture of nervous impatience. "Either of the places you mention, indeed, might answer my purpose; or, more probably, none of them. I want my place! my own place! my true place in the world! my proper sphere! my thing to do, which Nature intended me to perform when she fashioned me thus awry, and which I have vainly sought all my lifetime! Whether it be a footman's duty or a king's is of little consequence, so it be naturally mine. Can you help me here?"

"I will enter your application," answered the Intelligencer, at the same time writing a few lines in his volume. "But to undertake such a business, I tell you frankly, is quite apart from the ground covered by my official duties....