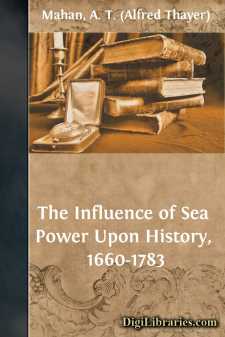 The history of Sea Power is largely, though by no means solely, a narrative of contests between nations, of mutual rivalries, of violence frequently culminating in war. The profound influence of sea commerce upon the wealth and strength of countries was clearly seen long before the true principles which governed its growth and prosperity were detected. To secure to one's own people a disproportionate share of such benefits, every effort was made to exclude others, either by the peaceful legislative methods of monopoly or prohibitory regulations, or, when these failed, by direct violence. The clash of interests, the angry feelings roused by conflicting attempts thus to appropriate the larger share, if not the whole, of the advantages of commerce, and of distant unsettled commercial regions, led to wars. On the other hand, wars arising from other causes have been greatly modified in their conduct and issue by the control of the sea. Therefore the history of sea power, while embracing in its broad sweep all that tends to make a people great upon the sea or by the sea, is largely a military history; and it is in this aspect that it will be mainly, though not exclusively, regarded in the following pages.

A study of the military history of the past, such as this, is enjoined by great military leaders as essential to correct ideas and to the skilful conduct of war in the future. Napoleon names among the campaigns to be studied by the aspiring soldier, those of Alexander, Hannibal, and Cæsar, to whom gunpowder was unknown; and there is a substantial agreement among professional writers that, while many of the conditions of war vary from age to age with the progress of weapons, there are certain teachings in the school of history which remain constant, and being, therefore, of universal application, can be elevated to the rank of general principles. For the same reason the study of the sea history of the past will be found instructive, by its illustration of the general principles of maritime war, notwithstanding the great changes that have been brought about in naval weapons by the scientific advances of the past half century, and by the introduction of steam as the motive power.

It is doubly necessary thus to study critically the history and experience of naval warfare in the days of sailing-ships, because while these will be found to afford lessons of present application and value, steam navies have as yet made no history which can be quoted as decisive in its teaching. Of the one we have much experimental knowledge; of the other, practically none. Hence theories about the naval warfare of the future are almost wholly presumptive; and although the attempt has been made to give them a more solid basis by dwelling upon the resemblance between fleets of steamships and fleets of galleys moved by oars, which have a long and well-known history, it will be well not to be carried away by this analogy until it has been thoroughly tested. The resemblance is indeed far from superficial....