The Indolence of the Filipino 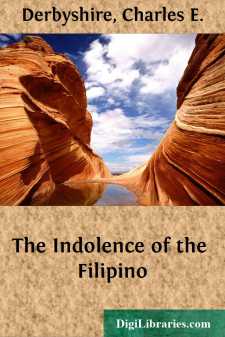 DOCTOR Sancianco, in his Progreso de Filipinas, (1), has taken up this question, agitated, as he calls it, and, relying upon facts and reports furnished by the very same Spanish authorities that rule the Philippines, has demonstrated that such indolence does not exist, and that all said about it does not deserve reply or even passing notice.

Nevertheless, as discussion of it has been continued, not only by government employees who make it responsible for their own shortcomings, not only by the friars who regard it as necessary in order that they may continue to represent, themselves as indispensable, but also by serious and disinterested persons; and as evidence of greater or less weight may be adduced in opposition to that which Dr. Sancianco cites, it seems expedient, to us to study this question thoroughly, without superciliousness or sensitiveness, without prejudice, without pessimism. And as we can only serve our country by telling the truth, however bit, tee it be, just as a flat and skilful negation cannot refute a real and positive fact, in spite of the brilliance of the arguments; as a mere affirmation is not sufficient to create something impossible, let us calmly examine the facts, using on our part all the impartiality of which a man is capable who is convinced that there is no redemption except upon solid bases of virtue.

The word indolence has been greatly misused in the sense of little love for work and lack of energy, while ridicule has concealed the misuse. This much-discussed question has met with the same fate as certain panaceas and specifies of the quacks who by ascribing to them impossible virtues have discredited them. In the Middle Ages, and even in some Catholic countries now, the devil is blamed for everything that superstitious folk cannot understand or the perversity of mankind is loath to confess. In the Philippines one's own and another's faults, the shortcomings of one, the misdeeds of another, are attributed to indolence. And just as in the Middle Ages he who sought the explanation of phenomena outside of infernal influences was persecuted, so in the Philippines worse happens to him who seeks the origin of the trouble outside of accepted beliefs.

The consequence of this misuse is that there are some who are interested in stating it as a dogma and others in combating it as a ridiculous superstition, if not a punishable delusion. Yet it is not to be inferred from the misuse of a thing that it does not exist.

We think that there must be something behind all this outcry, for it is incredible that so many should err, among whom we have said there are a lot of serious and disinterested persons. Some act in bad faith, through levity, through want of sound judgment, through limitation in reasoning power, ignorance of the past, or other cause. Some repeat what they have heard, without, examination or reflection; others speak through pessimism or are impelled by that human characteristic which paints as perfect everything that belongs to oneself and defective whatever belongs to another....