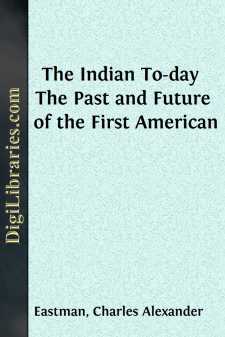 The author of this book was born in a teepee of buffalo hide near Redwood Falls, Minn., during the winter of 1858. His father was a full-blooded Sioux called "Many Lightnings," (Tawakanhdeota). His mother, the granddaughter of Chief "Cloud Man" of the Sioux and daughter of a well-known army officer, died shortly after his birth. He was named Ohiyesa (The Winner).

The baby was reared to boyhood by the care of his grandmother. When he was four years old, the so-called "Minnesota massacre" of 1862 separated him from his father and elder brothers and only sister, and drove him with a remnant of the eastern Sioux into exile in Manitoba. There for over ten years he lived the original nomadic life of his people in the family of an uncle, from whom he received the Spartan training of an Indian youth of that day. The knowledge thus gained of life's realities and the secrets of nature, as well as of the idealistic philosophy of the Indian, he has always regarded as a most valuable part of his education.

When Ohiyesa had reached the age of fifteen years, and had been presented with a flint-lock musket in token of his arrival at the estate of young manhood, he was astonished by the reappearance of the father whose supposed death at the hands of white men he had been taught that he must some day avenge. He learned that this father had adopted the religion and customs of the hated race, and was come to take home his youngest son.

Ohiyesa's new home was a pioneer log cabin on a farm at Flandreau, Dakota Territory, where a small group of progressive Indians had taken up homesteads like white men and were earning an independent livelihood. His long hair was cropped, he was put into a suit of citizen's clothing and sent off to a mission day school. At first reluctant, he soon became interested, and two years later voluntarily walked 150 miles to attend a larger and better school at Santee, Neb., where he made rapid progress under the veteran missionary educator, Dr. Alfred L. Riggs, and was soon advanced to the preparatory department of Beloit College, Wisconsin. His father had adopted his wife's English name of Eastman, and the boy named himself Charles Alexander.

After two years at Beloit, young Eastman went on to Knox College, Ill.; then east to Kimball Union Academy in New Hampshire, and to Dartmouth College, where Indians had found a special welcome since colonial days. He was graduated from Dartmouth in 1887, and went immediately to Boston University, where he took the medical course, and was graduated in 1890 as orator of his class. The entire time spent in primary, preparatory, college, and professional education, including the mastery of the English language, was seventeen years, or about two years less than is required by the average white youth.

Doctor Eastman went directly to the large Pine Ridge reservation in South Dakota as Government physician; and during the "Ghost dance" troubles of 1890-91 he was in charge of the wounded Indian prisoners in their emergency hospital....