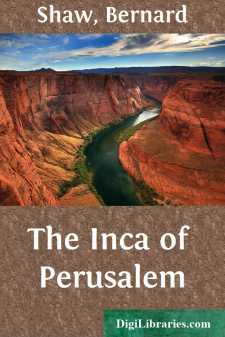 The tableau curtains are closed. An English archdeacon comes through them in a condition of extreme irritation. He speaks through the curtains to someone behind them.

THE ARCHDEACON. Once for all, Ermyntrude, I cannot afford to maintain you in your present extravagance. [He goes to a flight of steps leading to the stalls and sits down disconsolately on the top step. A fashionably dressed lady comes through the curtains and contemplates him with patient obstinacy. He continues, grumbling.] An English clergyman's daughter should be able to live quite respectably and comfortably on an allowance of £150 a year, wrung with great difficulty from the domestic budget.

ERMYNTRUDE. You are not a common clergyman: you are an archdeacon.

THE ARCHDEACON [angrily]. That does not affect my emoluments to the extent of enabling me to support a daughter whose extravagance would disgrace a royal personage. [Scrambling to his feet and scolding at her.] What do you mean by it, Miss?

ERMYNTRUDE. Oh really, father! Miss! Is that the way to talk to a widow?

THE ARCHDEACON. Is that the way to talk to a father? Your marriage was a most disastrous imprudence. It gave you habits that are absolutely beyond your means—I mean beyond my means: you have no means. Why did you not marry Matthews: the best curate I ever had?

ERMYNTRUDE. I wanted to; and you wouldn't let me. You insisted on my marrying Roosenhonkers-Pipstein.

THE ARCHDEACON. I had to do the best for you, my child. Roosenhonkers-Pipstein was a millionaire.

ERMYNTRUDE. How did you know he was a millionaire?

THE ARCHDEACON. He came from America. Of course he was a millionaire. Besides, he proved to my solicitors that he had fifteen million dollars when you married him.

ERYNTRUDE. His solicitors proved to me that he had sixteen millions when he died. He was a millionaire to the last.

THE ARCHDEACON. O Mammon, Mammon! I am punished now for bowing the knee to him. Is there nothing left of your settlement? Fifty thousand dollars a year it secured to you, as we all thought. Only half the securities could be called speculative. The other half were gilt-edged. What has become of it all?

ERMYNTRUDE. The speculative ones were not paid up; and the gilt-edged ones just paid the calls on them until the whole show burst up.

THE ARCHDEACON. Ermyntrude: what expressions!

ERMYNTRUDE. Oh bother! If you had lost ten thousand a year what expressions would you use, do you think? The long and the short of it is that I can't live in the squalid way you are accustomed to.

ERMYNTRUDE. I have formed habits of comfort.

ERMYNTRUDE. Well, elegance if you like. Luxury, if you insist. Call it what you please. A house that costs less than a hundred thousand dollars a year to run is intolerable to me.

THE ARCHDEACON. Then, my dear, you had better become lady's maid to a princess until you can find another millionaire to marry you.

ERMYNTRUDE. That's an idea. I will. [She vanishes through the curtains.]