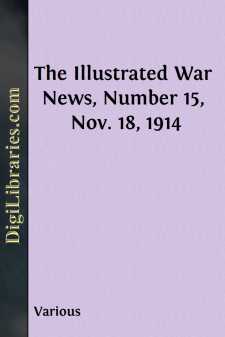 Our gracious Sovereign—more so even than his deceased father, who had also a conspicuous gift that way—has ever shown a singular felicity in voicing the sentiments of his people, but never more so than when he sent this message to Sir John French: "The splendid pluck, spirit, and endurance shown by my troops in the desperate fighting which has continued for so many days against vastly superior forces fills me with admiration." That sovereign message to his heroic soldiers—such as his ancestor Henry V. might have addressed to his 10,000 long-enduring conquerors on the night of Agincourt—was nobly supplemented by this passage from the following day's Speech from the Throne: "My Navy and Army continue, throughout the area of conflict, to maintain in full measure their glorious traditions. We watch and follow their steadfastness and valour with thankfulness and pride, and there is, throughout my Empire, a fixed determination to secure, at whatever sacrifice, the triumph of our arms and the vindication of our cause."

The Admiralty stated on Nov. 11, "This search resulted on Oct. 30 in the 'Königsberg' being discovered by H.M.S. 'Chatham' (Captain Sidney R. Drury-Lowe, R.N.) hiding in shoal water about six miles up the Rufigi Ritter.... (German East Africa) ... She is now imprisoned, and unable to do any further harm."—[Photo. by Elliott and Fry.]

Captain Glossop received the following message from the First Lord of the Admiralty: "Warmest congratulations on the brilliant entry of the Australian Navy into the war, and the signal service rendered to the Allied cause and to peaceful commerce by the destruction of the 'Emden.'"

ONE OF THE VESSELS CONCERNED IN "THE LARGE COMBINED OPERATION" AGAINST THE "EMDEN" H.M.A.S. "MELBOURNE."

While it fell to H.M.A.S. "Sydney" to bring the "Emden" to action, another vessel of the Australian Navy, the "Melbourne," also joined in the pursuit. The Admiralty stated that a "large combined operation by fast cruisers against the 'Emden' has been for some time in progress. In this search, which covered an immense area, the British cruisers have been aided by French, Russian, and Japanese vessels working in harmony. H.M.A.S. 'Melbourne' and 'Sydney' were also included in these movements."

Photograph by Sport and General.

At whatever sacrifice! And that promises to be terrible. For what will be the sacrifice entailed by two years of war—to put its duration at a moderate estimate—if our casualties in life and limb alone (compared with which our millions of money are as nothing) amounted, according to an official statement in Parliament, to about 57,000 of all ranks up to the end of October, and it is believed that 10,000 at least must be added for the first ten days of November?...