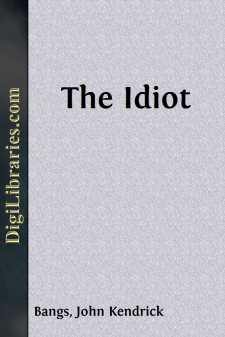 For some weeks after the happy event which transformed the popular Mrs. Smithers into the charming Mrs. John Pedagog all went well at that lady's select home for single gentlemen. It was only proper that during the honey-moon, at least, of the happy couple hostilities between the Idiot and his fellow-boarders should cease. It was expecting too much of mankind, however, to look for a continued armistice, and the morning arrived when Nature once more reasserted herself, and trouble began. Just what it was that prompted the remark no one knows, but it happened that the Idiot did say that he thought that, after all, life on a canal-boat had its advantages. Mr. Pedagog, who had come into the dining-room in a slightly irritable frame of mind, induced perhaps by Mrs. Pedagog's insistence that as he was now part proprietor of the house he should be a little more prompt in making his contributions towards its maintenance, chose to take the remark as implying a reflection upon the way things were managed in the household.

"Humph!" he said. "I had hoped that your habit of airing your idiotic views had been put aside for once and for all."

"Very absurd hope, my dear sir," observed the Idiot. "Views that are not aired become musty. Why shouldn't I give them an atmospheric opportunity once in a while?"

"Because they are the sort of views to which suffocation is the most appropriate end," snapped the School-Master. "Any man who asserts, as you have asserted, that life on a canal-boat has its advantages, ought to go further, and prove his sincerity by living on one."

"I can't afford it," said the Idiot, meekly. "It isn't cheap by any manner of means. In the first place, you can't live happily on a canal-boat unless you can afford to keep horses. In fact, canal-boat life is a combination of the most expensive luxuries, since it combines yachting and driving with domesticity. Nevertheless, if you will put your mind on it, you will find that with a canal-boat for your home you can do a great many things that you can't do with a house."

"I decline to put my mind on a canal-boat," said Mr. Pedagog, sharply, passing his coffee back to Mrs. Pedagog for another lump of sugar, thereby contributing to that good lady's discomfiture, since before their marriage the mere fact that the coffee had been poured by her fair hand had given it all the sweetness it needed; or at least that was what the School-Master had said, and more than once at that.

"You are under no obligation to do so," the Idiot returned. "Though if I had a mind like yours I'd put it on a canal-boat and have it towed away somewhere out of sight. These other gentlemen, however, I think, will agree with me when I say that the mere fact that a canal-boat can be moved about the country, and is in no sense a fixture anywhere, shows that as a dwelling-place it is superior to a house. Take this house, for instance. This neighborhood used to be the best in town. It is still far from being the worst neighborhood in town, but it is, as it has been for several years, deteriorating....