The Humour of Homer and Other Essays 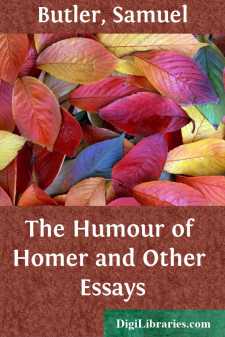 The nucleus of this book is the collection of essays by Samuel Butler, which was originally published by Mr. Grant Richards in 1904 under the title Essays on Life, Art and Science, and reissued by Mr. Fifield in 1908.  To these are now added another essay, entitled “The Humour of Homer,” a biographical sketch of the author kindly contributed by Mr. Henry Festing Jones, which will add materially to the value of the edition, and a portrait in photogravure from a photograph taken in 1889—the period of the essays.

From a photograph made by Pizzetta in Varallo in 1889.  Emery Walker Ltd., ph. sc.

“The Humour of Homer” was originally delivered as a lecture at the Working Men’s College in Great Ormond Street on the 30th January, 1892, the day on which Butler first promulgated his theory of the Trapanese origin of the Odyssey in a letter to the Athenæum.  Later in the same year it was published with some additional matter by Messrs. Metcalfe and Co. of Cambridge.  For the next five years Butler was engaged upon researches into the origin and authorship of the Odyssey, the results of which are embodied in his book The Authoress of the “Odyssey,” originally published by Messrs. Longman in 1897.  Butler incorporated a good deal of “The Humour of Homer” into The Authoress of the “Odyssey,” but the section relating to the Iliad naturally found no place in the later work.  For the sake of this alone “The Humour of Homer” deserves to be better known.  Written as it was for an artisan audience and professing to deal only with one side of Homer’s genius, “The Humour of Homer” must not, of course, be taken as an exhaustive statement of Butler’s views upon Homeric questions.  It touches but lightly on important points, particularly regarding the origin and authorship of the Odyssey, which are treated at much greater length in The Authoress of the “Odyssey.”

Nevertheless, “The Humour of Homer” appears to me to have a special value as a kind of general introduction to Butler’s more detailed study of the Odyssey.  His attitude towards the Homeric poems is here expressed with extraordinary freshness and force.  What that attitude was is best explained by his own words: “If a person would understand either the Odyssey or any other ancient work, he must never look at the dead without seeing the living in them, nor at the living without thinking of the dead.  We are too fond of seeing the ancients as one thing and the moderns as another.”  Butler did not undervalue the philological and archæological importance of the Iliad and the Odyssey, but it was mainly as human documents that they appealed to him.  This, I am inclined to suspect, was the root of the objection of academic critics to him and his theories.  They did not so much resent the suggestion that the author of the Odyssey was a woman; they could not endure that he should be treated as a human being.

Of the remaining essays two were originally delivered as lectures; the others appeared first in The Universal Review in 1888, 1889 and 1890.  I should perhaps explain why two other essays which also appeared in The Universal Review are not included in this collection.  The first of these, entitled “L’Affaire Holbein-Rippel,” relates to a drawing of Holbein’s “Danse des Paysans” in the Basle Museum, which is usually described as a copy, but which Butler believed to be the work of Holbein himself.  This essay requires to be illustrated in so elaborate a manner that it was impossible to include it in a book of this size.  The second essay, which is a sketch of the career of the sculptor Tabachetti, was published as the first section of an article, entitled “A Sculptor and a Shrine,” of which the second part is here given under the title “The Sanctuary of Montrigone.”  The section devoted to the sculptor contains all that Butler then knew about Tabachetti, but since it was written various documents have come to light, principally through the investigations of Cavaliere Francesco Negri, of Casale Monferrato, which negative some of Butler’s conclusions.  Had Butler lived, I do not doubt that he would have revised his essay in the light of Cavaliere Negri’s discoveries, the value of which he fully recognized.  As it stands the essay requires so much revision that I have decided to omit it altogether and to postpone giving English readers a full account of Tabachetti’s career until a second edition of Butler’s “Ex Voto,” in which Tabachetti’s work is discussed in detail, is required.  Meanwhile I have given a brief summary of the main facts of Tabachetti’s life in a note (p....