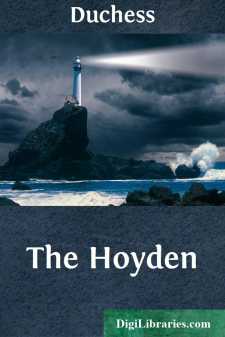 CHAPTER I. HOW DIAMOND CUT DIAMOND, AND HOW THE SPARKS FLEW.

The windows are all wide open, and through them the warm, lazy summer wind is stealing languidly. The perfume of the seringas from the shrubbery beyond, mingled with all the lesser but more delicate delights of the garden beneath, comes with the wind, and fills the drawing-room of The Place with a vague, almost drowsy sense of sweetness.

Mrs. Bethune, with a face that smiles always, though now her very soul is in revolt, leans back against the cushions of her lounging chair, her fine red hair making a rich contrast with the pale-blue satin behind it.

"You think he will marry her, then?"

"Think, think!" says Lady Rylton pettishly. "I can't afford to think about it. I tell you he must marry her. It has come to the very last ebb with us now, and unless Maurice consents to this arrangement——"

She spreads her beautiful little hands abroad, as if in eloquent description of an end to her sentence.

Mrs. Bethune bursts out laughing. She can always laugh at pleasure.

"It sounds like the old Bible story," says she; "you have an only son, and you must sacrifice him!"

"Don't study to be absurd!" says Lady Rylton, with a click of her fan that always means mischief.

She throws herself back in her chair, and a tiny frown settles upon her brow. She is such a small creation of Nature's that only a frown of the slightest dimensions could settle itself comfortably between her eyes. Still, as a frown, it is worth a good deal! It has cowed a good many people in its day, and had, indeed, helped to make her a widow at an early age. Very few people stood up against Lady Rylton's tempers, and those who did never came off quite unscathed.

"Absurd! Have I been absurd?" asks Mrs. Bethune. "My dear Tessie"—she is Lady Rylton's niece, but Lady Rylton objects to being called aunt—"such a sin has seldom been laid to my charge."

"Well, I lay it," says Lady Rylton with some emphasis.

She leans back in her chair, and, once again unfurling the huge black fan she carries, waves it to and fro.

Marian Bethune leans back in her chair too, and regards her aunt with a gaze that never wavers. The two poses are in their way perfect, but it must be confessed that the palm goes to the younger woman.

It might well have been otherwise, as Lady Rylton is still, even at forty-six, a very graceful woman. Small—very small—a sort of pocket Venus as it were, but so carefully preserved that at forty-six she might easily be called thirty-five. If it were not for her one child, the present Sir Maurice Rylton, this fallacy might have been carried through. But, unfortunately, Sir Maurice is now twenty-eight by the church register. Lady Rylton hates church registers; they tell so much; and truth is always so rude!

She is very fair. Her blue eyes have still retained their azure tint—a strange thing at her age. Her little hands and feet are as tiny now as when years ago they called all London town to look at them on her presentation to her Majesty....