The House of Whispers 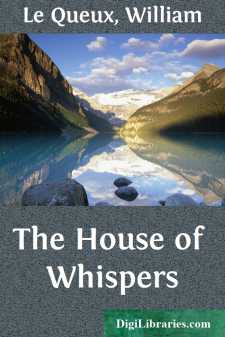 CHAPTER I THE LAIRD OF GLENCARDINE

"But you are breathing hard; your hand trembles; your pulse beats quickly. There's something amiss—I'm sure there is. Now, what is it? Come, no secrets."

The girl, quickly snatching away her hand, answered with a forced laugh, "How absurd you really are, dear old dad! You're always fancying something or other."

"Because my senses of hearing and feeling are sharper and more developed than those of other folk perhaps," replied the grey-bearded old gentleman, as he turned his sharp-cut, grey, but expressionless countenance to the tall, sweet-faced girl standing beside his chair.

No second glance was needed to realise the pitiful truth. The man seated there in his fine library, with the summer sunset slanting across the red carpet from the open French windows, was blind.

Since his daughter Gabrielle had been a pretty, prattling child of nine, nursing her dolly, he had never looked upon her fair face. But he was ever as devoted to her as she to him.

Surely his was a sad and lonely life. Within the last fifteen years or so great wealth had come to him; but, alas! he was unable to enjoy it. Until eleven years ago he had been a prominent figure in politics and in society in London. He had sat in the House for one of the divisions of Hampshire, was a member of the Carlton, and one year he found his name among the Birthday Honours with a K.C.M.G. For him everybody predicted a brilliant future. The Press gave prominence to his speeches, and to his house in Park Street came Cabinet Ministers and most of the well-known men of his party. Indeed, it was an open secret in a certain circle that he had been promised a seat in the Cabinet in the near future.

Then, at the very moment of his popularity, a terrible tragedy had occurred. He was on the platform of the Albert Hall addressing a great meeting at which the Prime Minister was the principal speaker. His speech was a brilliant one, and the applause had been vociferous. Full of satisfaction, he drove home that night to Park Street; but next morning the report spread that his brilliant political career had ended. He had suddenly been stricken by blindness.

In political circles and in the clubs the greatest consternation was caused, and some strange gossip became rife.

It was whispered in certain quarters that the affliction was not produced by natural causes. In fact, it was a mystery, and one that had never been solved. The first oculists of Europe had peered into and tested his eyes, but all to no purpose. The sight had gone for ever.

Therefore, full of bitter regrets at being thus compelled to renounce the stress and storm of political life which he loved so well, Sir Henry Heyburn had gone into strict retirement at Glencardine, his beautiful old Perthshire home, visiting London but very seldom.

He was essentially a man of mystery. Even in the days of his universal popularity the source of his vast wealth was unknown....