The House of Martha 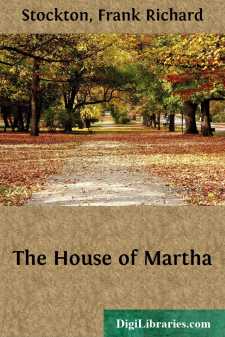 I. MY GRANDMOTHER AND I.

My grandmother sat in her own particular easy-chair by the open window of her back parlor. This was a pleasant place in which to sit in the afternoon, for the sun was then on the other side of the house, and she could look not only over the smooth grass of the side yard and the flower beds, which were under her especial care, but across the corner of the front lawn into the village street. Here, between two handsome maple-trees which stood upon the sidewalk, she could see something of what was going on in the outer world without presenting the appearance of one who is fond of watching her neighbors. It was not much that she saw, for the street was a quiet one; but a very little of that sort of thing satisfied her.

She was a woman who was easily satisfied. As a proof of this, I may say that she looked upon me as a man who always did what was right. Indeed, I am quite sure there were cases when she saved herself a good deal of perplexing cogitation by assuming that a thing was right because I did it. I was her only grandchild: my father and mother had died when I was very young, and I had always lived with her,—that is, her house had always been my home; and as I am sure there had never been any reason why I should not be a dutiful and affectionate grandson, it was not surprising that she looked upon me with a certain tender partiality, and that she considered me worthy of all the good that she or fortune could bestow upon me.

My grandmother was nearly seventy, but her physical powers had been excellently well preserved; and as to her mental vigor, I could see no change in it. Even when a little boy I had admired her powers of sympathetic consideration, by which she divined the needs and desires of her fellow-creatures; and now that I had become a grown man I found those powers as active and ready as they had ever been.

The village in which we lived contained a goodly number of families of high standing and comfortable fortune. It was a village of well-kept and well-shaded streets, of close-cut grass, with no litter on the sidewalks. Our house was one of the best in the place, and since I had come of age I had greatly improved it. I had a fair inheritance from my mother, and this my grandmother desired me to expend without reference to what I was receiving and would receive from her. To her son's son would come ultimately everything that she possessed.

Being thus able to carry out my ideas concerning the comfort and convenience of a bachelor, I had built a wing to my grandmother's house, which was occupied only by myself. It communicated by several doors with the main building, and these doors were nearly always open; but it was satisfactory to me to think that if I chose I might shut and lock them, and thus give my apartment the advantages of a separate house. The ground floor of my establishment consisted of a large and handsome library and study, with a good-sized anteroom opening from it, and above were my sleeping and dressing rooms. With the exception of the time devoted to reading, reflection, and repose, I lived with my grandmother.

Neither of us, however, confined ourself to this village life. The winters my grandmother generally spent with a married sister in a neighboring city, and I was accustomed to visit and journey whenever it pleased me. Recently I had spent a year in Europe, and on my return I joined my grandmother for a while, before going to our village home.

II. RELATING TO MY YEAR IN EUROPE.

I do not suppose that any one ever enjoyed travel and residence in England and on the Continent more than I did; but I do not now intend to give any account of my experiences, nor of the effect they had upon me, save in one regard. I had traveled and lived for the most part alone, and one of the greatest pleasures connected with my life in Europe was the anticipation of telling my friends who had never crossed the ocean what I had seen, heard, and done.

But when I returned to America I met with a great disappointment: my glowing anticipations were not realized. I could find scarcely any one who cared to know what I had seen, heard, or done.

At this I was as much surprised as disappointed. I believed that I possessed fair powers of description and narration, and many of my traveling experiences were out of the common. In fact, I had endeavored to see things the ordinary traveler does not see, and to do things which he seldom does. I found, however, that my unusual experiences were of no advantage to me in making people desirous to hear accounts of my travels. I might as well have joined a party of personally conducted tourists.

My friends and acquaintances in town were all glad to see me, not that they might hear what had happened to me, but that they might tell me what had happened to them. This disposition sometimes threw me into a state of absolute amazement. I could not comprehend, for instance, why Mrs. Gormer, who had known me for years, and who I thought would take such an active interest in everything that concerned me, should dismiss my European tour with a few remarks in regard to my health in the countries I had passed through, and then begin an animated account of the troubles she had had since I had been away: how the house she had been living in had had two feet of water in the cellar for weeks at a time, and how nobody could find out whether it was caused by a spring in the ground or the bursting of an unknown water-pipe,—but no matter what it was, they couldn't stay there; and what a dreadful time they had in finding another house; and how the day appointed for Jennie's wedding coming directly in the middle of the moving, it had to be postponed, for she declared she would never be married anywhere but at home; and how several of Mr. Barclay's relations came down from New Hampshire on purpose to be at the wedding, and had to stay either at hotels or with friends, for it was more than a week before her house could be made ready for the wedding. She then remarked that of course I had heard of the shameful way in which John had been treated in regard to that position in the Treasury department at Washington; and as I had not heard she went on and told me about it, until it was time for me to go.

At my club, some of the men did not know that I had been away, but there were others who were very glad to hear that I had been in Europe, because it gave them an opportunity to tell me about that very exciting election of Brubaker, a man of whom I had never heard, who had been proposed by Shuster, with whom I was not acquainted, and seconded by Cushman, whom I did not know....