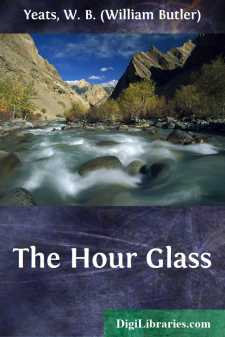 Add to My Favorites
Published: 9 years ago
Downloads: 39
Rating: (1 Vote)

SCENE: A large room with a door at the back and another at the side opening to an inner room. A desk and a chair in the middle. An hour-glass on a bracket near the door. A creepy stool near it. Some benches. The WISE MAN sitting at his desk.

WISE MAN [turning over the pages of a book]. Where is that passage I am to explain to my pupils to-day? Here it is, and the book says that it was written by a beggar on the walls of Babylon: "There are two living countries, the one visible and the one invisible; and when it is winter with us it is summer in that country; and when the November winds are up among us it is lambing-time there." I wish that my pupils had asked me to explain any other passage, for this is a hard passage. [The FOOL comes in and stands at the door, holding out his hat. He has a pair of shears in the other hand.] It sounds to me like foolishness; and yet that cannot be, for the writer of this book, where I have found so much knowledge, would not have set it by itself on this page, and surrounded it with so many images and so many deep colors and so much fine gilding, if it had been foolishness.

FOOL. Give me a penny.

WISE MAN. [Turns to another page.] Here he has written: "The learned in old times forgot the visible country." That I understand, but I have taught my learners better.

FOOL. Won't you give me a penny?

WISE MAN. What do you want? The words of the wise Saracen will not teach you much.

FOOL. Such a great wise teacher as you are will not refuse a penny to a Fool.

WISE MAN. What do you know about wisdom?

WISE MAN. What is it you have seen?

FOOL. When I went by Kilcluan where the bells used to be ringing at the break of every day, I could hear nothing but the people snoring in their houses. When I went by Tubbervanach where the young men used to be climbing the hill to the blessed well, they were sitting at the crossroads playing cards. When I went by Carrigoras where the friars used to be fasting and serving the poor, I saw them drinking wine and obeying their wives. And when I asked what misfortune had brought all these changes, they said it was no misfortune, but it was the wisdom they had learned from your teaching.

WISE MAN. Run round to the kitchen, and my wife will give you something to eat.

FOOL. That is foolish advice for a wise man to give.

FOOL. What is eaten is gone. I want pennies for my bag. I must buy bacon in the shops, and nuts in the market, and strong drink for the time when the sun is weak. And I want snares to catch the rabbits and the squirrels and the bares, and a pot to cook them in.

WISE MAN. Go away. I have other things to think of now than giving you pennies.

FOOL. Give me a penny and I will bring you luck. Bresal the Fisherman lets me sleep among the nets in his loft in the winter-time because he says I bring him luck; and in the summer-time the wild creatures let me sleep near their nests and their holes. It is lucky even to look at me or to touch me, but it is much more lucky to give me a penny. [Holds out his hand.] If I wasn't lucky, I'd starve.

WISE MAN. What have you got the shears for?

FOOL. I won't tell you. If I told you, you would drive them away.

WISE MAN. Whom would I drive away...?